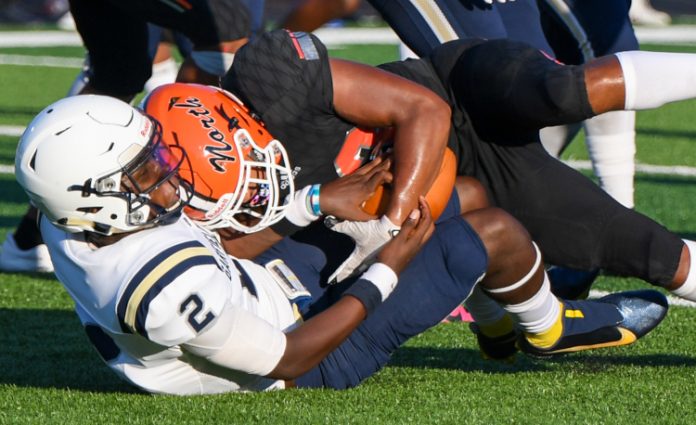 EASTLAKE—Curtis Thomas caught two touchdown passes and Dylan Hargas returned a fumble for a touchdown as North opened the season with a 22-15 win over visiting Garfield Heights at Nick Carter Stadium on Friday.

While it wasn’t a priority, avenging a 13-7 loss to the Bulldogs in the first round of the playoffs last season certainly was a motivating factor for the Rangers.

“Honestly, we never talked about the revenge factor; that was never a thing for us,” said North head coach Shawn Dodd. “We just wanted to get off to a fast start because we have so many new guys and we have some young guys out there in a sophomore quarterback and sophomore tailback, and some guys that didn’t see the field last season. That was nice. I don’t know if I’ve ever done that before where we’ve finished with a team and then started with that same team the next season.”

Most important to Dodd was setting the tone for the rest of the season and with their big plays the Rangers accomplished that goal while also identifying some issues to clean up moving forward.

“Getting off to a fast start with the win, you could see some jitters out there,” Dodd said. “We made a lot of mistakes that we have to clean up or it’s going to be a long season. We’ve got a lot of work to do.”

One of those mistakes occurred on the first offensive snap when the Rangers were flagged for a false start.

Thomas, a junior, atoned for his team’s mistake two plays later when he took a screen pass from sophomore quarterback Zach Rummel and outran the defense for a 61-yard score that gave the Rangers a 6-0 lead.

Garfield Heights threatened late in the second quarter but senior Dom Marciante picked off a pass in the end zone to end the threat.

The momentum shift didn’t last long as an errant snap went over Rummel’s head and into the end zone for a safety that cut the Ranger lead to 6-2.

DeMarius Dues then scored on a 51-yard touchdown reception to give the visiting Bulldogs an 8-6 lead. North senior Ryan Baer blocked the extra point.

Thomas gave the Rangers the lead for good when he caught another screen pass and raced 55 yards for a touchdown with 8:00 left in the third quarter.

“He is one of the most explosive, electrifying players in the area,” Dodd said of Thomas. “I would put him up against anybody in Northeast Ohio. He is that fast and that explosive. Pound for pound, he’s one of the better players in Northeast Ohio if not all of Ohio. People are going to learn about this kid real quick. He probably averaged 25-30 yards per touch tonight.”

North’s defense took it from there.

The Rangers forced the Bulldogs to punt but a bad snap led to the Garfield Heights punter’s knee touchdown down at his own 15-yard line.

North converted that into a 35-yard field goal by sophomore kicker Daniel Tadic.

“Shout out to our kicker,” Dodd said. “He banged out that field goal and had a couple of touchbacks and deep kicks. I thought Daniel Tadic did an outstanding job kicking tonight.”

Six minutes later, as the clock expired in the third quarter, Hargas, a junior, scooped up a fumble and returned it nearly 65 yards for a score. Tadic added the extra point for a 22-8 lead.

The Bulldogs scored on a short run with 1:53 remaining in the game but the Rangers converted a first down and ran out the clock on Week 1.

“Defensively, they’ve really played well all summer and even throughout our scrimmages,” Dodd said. “The offense has sputtered a little bit at times as we try to find the right pieces and holding some things back–we didn’t turn Curt loose this summer–but the defense played well aside from that last drive. The most disappointing thing on defense was that goal line, we just weren’t set. Not that we would have stopped them but we weren’t even down and ready and that’s on me. We have to do a better job of when we’re tired of focusing in those types of situations.”

North’s defense took a hit early in the game when senior linebacker Laurence Lawson was sidelined with an injury.

“Once Lawrence went down that changed our dynamics a little bit and those three played a lot more than they probably anticipated,” Dodd said. “I was really proud of the way those guys stepped up.”

Garfield Heights allowed a few explosive plays but the Bulldogs were successful in taking away North’s inside run game and with North’s perimeter playmakers—Thomas and Marciante—struggling with cramps, the Rangers struggled at times to move the football consistently.

Add in the fact that North’s offensive line played together for the first time on Friday, and the Rangers know they’ll have some growing to do on the offensive side of the ball.

“We’ve got a nice combination of inside-outside but they were really keying on our inside stuff a little bit and Curt was cramping, Dom was cramping, so we had a hard time getting those guys going on the perimeter so we were kind of forced to keep the ball inside,” Dodd said. “We have a brand new offensive line that, besides Ryan (Baer), the other four are all new starters. They haven’t played together yet. Every scrimmage, it’s been a different combination of guys. This was the first time that unit was together so they’re going to get better.”

North travels to Revere on Friday.