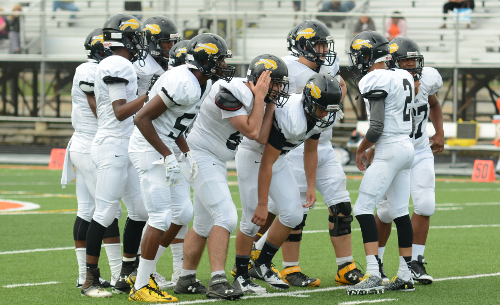 In search of its first win in the 2014 season, Beachwood’s football team needed a big play to get things going in a Chagrin Valley Conference crossover game at Cardinal on Friday.

The Bison got three in the game’s first three minutes and went on to win 29-14.

Nate Hamilton ran 73 yards for a touchdown on the game’s first offensive play and one play after the Bison recovered a Cardinal fumble at the Huskies’ 39 Max Balazs found Ronald Jones for another score with 9:16 left in the opening quarter.

“It wasn’t easy,” said Beachwood coach Mike Gibbons. “It was definitely good to get a win, especially being the first one. We had a couple of tough games there at the beginning of the year and in the third one we didn’t play really well. Hopefully we’ll keep it going and get another one.”

Cardinal’s Lester Troyer cut Beachwood’s lead to 15-7 early in the second quarter when he scored on a six yard run.

The Bison, who improved to 1-3, responded with a second touchdown pass from Balazs to Jones. This one covered seven yards and gave Beachwood a 22-7 lead with 56 seconds left in the first half.

Balazs completed 13-of-20 passes for 130 yards and two scores in the game.

“He played well,” Gibbons said. “He was definitely throwing the ball well. He did a really good job. I’m proud of the way he played.”

Cardinal dominated time of possession in the third quarter and cut the Bison led to 22-14 after Nate Peters’ 1-yard scoring run with 2:55 left in the quarter.

Hamilton, who finished the game with 16 carries for 162 yards and two scores, closed out the scoring with a 61 yard run with 1:41 left to play.

“We only ran like four plays in the third quarter,” Gibbons said. “We definitely didn’t have a lot of possessions. Fortunately the defense was able to close them out and get stops and Nate broke a long one to finish it off.”

Clark Thurling led the Huskies with 96 rushing yards on 21 carries. Troyer finished with 13 carries for 87 yards.

Beachwood travels to Berkshire next Friday while Cardinal, who dropped to 3-1, plays at Richmond Heights.