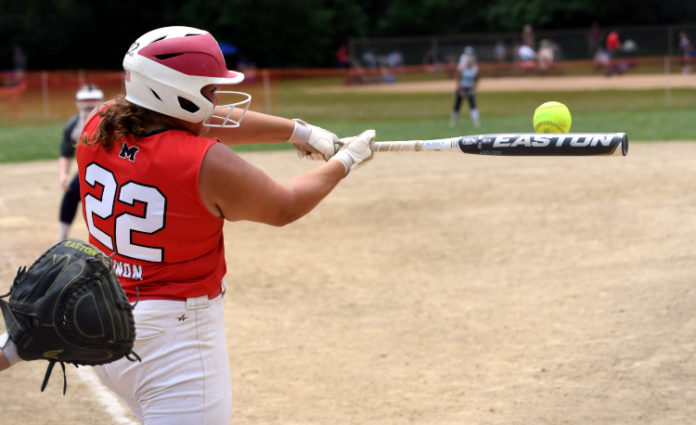 WILLOUGHBY—Mentor Big Red 05 is headed to the national tournament after winning the Reach for the Starzz qualifying tournament at Todd Field over the weekend.

Big Red opened the tournament with a 1-0 loss to North Coast Express on Friday and then went on to win five straight games, which include an 8-4 win over the Express in the championship game on Sunday.

“It was an amazing feeling,” said Sophia Rowan (NDCL). “We lost to them on Friday in a close game, 1-0. We really wanted to get back on the field and we went into Saturday really motivated. We won our two Saturday games big, and then won our first two on Sunday, and we were really excited to play them again in the championship. We had momentum, and that’s what brought us to our victory in the qualifier.”

Mentor bounced back from that 1-0 loss with a 10-0 win over Phoenix Fastpitch and closed out pool play with a 13-0 win over Willoughby Starzz.

The Big Red opened bracket play with a 7-2 win over Ohio Energy and then beat the North Coast Crushers in the semifinals, 3-1, to set up the rematch with the Express.

“It felt amazing to win the championship,” said Addison Seidler (Mentor). “The past couple years we have made it to the championship game many times but weren’t able to pull out a win. These last two weekends in Solon and Willoughby really showed how good our team is. I know when we’re all cheering and in the right mental stage, we as a team are so much better, including myself.”

Siedler was dominant in the circle.

She allowed just two earned runs on seven hits and struck out 32 in 18 innings of work. In three appearances, she finished 2-1 and she twice struck out 10 or more batters.

“My fastball and drop ball was really working this weekend,” Siedler said. “I was hitting all my spots and was able to strike many girls out on them, as well as my changeup. My teammates play a big role in my pitching performance as well by cheering for me and making the outs when we need them. We’ve been playing very good competition lately and with all my hard work I’ve put into pitching it’s really showing that we as a team can compete with anyone.”

Ava Baeslach (NDCL) led the Big Red in hitting as she finished the tournament with a .563 batting average. She posted nine hits in 16 at-bats with six runs scored and four doubles.

“I just approached my at-bats this weekend the same way that I always do,” Rowan said. “I step in the box just wanting to get a hit and produce for my team, and thankfully this weekend I was able to do that. That’s all I ever really want to do.”

Siedler was nearly as impressive at the plate as she was in the circle. She batted .412 with five runs scored, two RBI, and a double.

“Friday was a rough game for us,” Siedler said of the 1-0 setback to the Express. “We weren’t in the right mental stage and I think it was just one of those days where it wasn’t happening. But, being able to come back today to pull out the win was amazing. During this game we were really focused, we made all the plays, and didn’t let anything past us. We all contributed in our own way and I’m proud of how we all played this weekend.”

Harvey’s Alexa Bailey finished 3-0 in the circle for Big Red. She allowed three earned runs on 12 hits and struck out seven in 12 2/3 innings of work.

Kirtland heats up in second half to beat Wickliffe