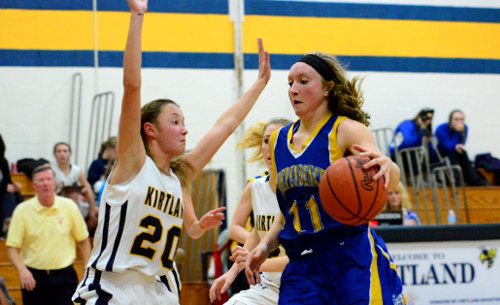 KIRTLAND—Independence used two 10-point runs to pull away from Kirtland in a 51-38 win on Tuesday.

With the score tied at 4 with 2:44 left in the first quarter, Hallie Zumack, who scored a game-high 16 points started Independence’s first run. Jess Dmitruk, who added 10 points, made it 8-4 and Halle Dorko, who finished with 12 points, hit a jump shot to make it 10-4 then picked off a Kirtland pass and converted it into an easy layup. Dorko would add a pair of free throws to make it 14-4.

“That was big,” said Independence head coach Mike Marcinko. “We didn’t do it our last game. For whatever reason, we didn’t play as aggressively as we do normally. We tried to get back to that at practice to go back to what we were doing. I thought we did that and I thought we did a good job of defending what they ran.”

Behind Samantha Achauer, who scored 15 points, the Hornets battled back to cut Independence’s lead to 16-14 at halftime.

Back-to-back buckets from Taylor Somodji and Kerri Zalba pulled Kirtland to within 21-20 midway through the third quarter but again the Blue Devils went on a big run to pull away.

Dmitruk scored on an easy layup then hit a pair of free throws then Julia Riley, Zumack and Dorko scored to push the Blue Devil lead to 31-20 with just two minutes left in the third.

“They’re a very athletic team and they’re very well balanced,” said Kirtland coach Bob Bell. “They’ve got a very good inside game, strong players in Dorko and Zumack, and I thought No. 23 (Dmitruk) did a very nice job coming off the bench. We had a little bit of a mismatch there and she backed us in and scored two or three really big goals that kind of changed the complexion of the game every time we started to make a comeback.”

Dmitruk dominated the paint for the Blue Devils.

She pulled down rebound after rebound and was there to collect the easy baskets under the hoop.

“She probably wishes she had about eight more because a couple times early on she didn’t square up,” Marcinko said. “She gives us such a spark off the bench rebounding-wise and she has the ability to score. I thought she did a great job catching the ball deep. We missed some but she made a boatload and she’s money at the free throw line.”

The Blue Devils also did a nice job of containing Achauer, the Hornets’ leading scorer.

Independence’s defense made it very difficult for the Hornets, who entered the game in a bit of a shooting slump, to establish any rhythm on offense.

“They were playing a good aggressive defense,” Bell said. “They were hedging out and getting a hand on a lot of passes. We still had some nice looks at the basket but our shooting just hasn’t come around yet. Generally, with a young team, that’s probably about the last thing that’s going to come around is shooting with confidence against pressure.”

Independence improved to 2-1. The Hornets dropped to 1-3 and travel to Berkshire on Friday.