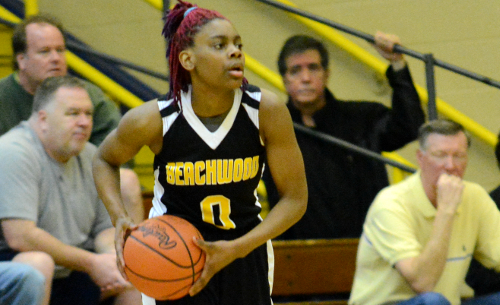 Last season, Mikah Aldridge, Aneisha Hardin and Aryana Jackson led Beachwood to the regional championship game for the second straight season. The names have changed this year but the results have been quite similar.

Jackson, Taylor Royster and Natalie Hill combined for 47 points to lead the Bison to a come from behind 53-49 win at Villa Angela-St. Joseph on Saturday.

“It’s a different three than last year,” said Beachwood coach Mike Coreno. “Last year it was three guards. We lost a lot of perimeter scoring, so now it’s two guards and a post player. That changes things. We went inside to Natalie today and yesterday (in a 68-53 win over Richmond Heights). Aryana hit a few 3’s and Taylor’s game is even keel. She drives and gets to the free throw line. They’re giving us a lot of diversity where we can play inside and outside.”

Jackson led all scorers with 19 points while Royster contributed with 17. Hill scored 11 despite being in foul trouble for most of the game. The trio combined for 52 of Beachwood’s 68 points against Richmond Heights on Friday.

The Bison, who improved to 2-0, got off to a rocky start.

The early foul trouble forced Coreno to switch out of his pressure defense to a zone. That allowed the Vikings to get to the hoop often, which led to a 26-21 halftime lead.

Beachwood regrouped and won the second half and the game.

“The kids overcame the adversity of being in foul trouble and having to make adjustments,” Coreno said. “I’m proud of the way they handled all those situations.”

The Bison likely will be in that position again, especially early in the season as each player familiarizes herself with her role in the up-tempo defense.

Mariah McGee scored 14 points for the Vikings. Seven other Vikings found the basket in the game.

“They had a couple kids hit some big 3’s,” Coreno said. “They were very physical on the boards. With Natalie sitting out second half that gave them a lot of second half chances.”

In winning its first two games, Beachwood proved it can beat athletic teams. On Tuesday, the Bison will face another challenge when they play at Chagrin Falls. The Tigers are loaded with talent and height.

“Now we’re going into unknown territory,” Coreno said. “We’re going into a lot of height. We’re going to work on changing a couple things to combat that height factor. We saw a real athletic look two nights in a row and now we’ll see a real big look on Tuesday.”