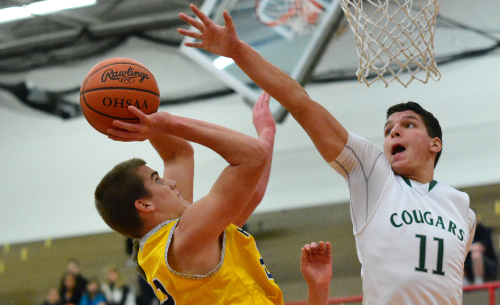 MENTOR—Connor Fitzgerald scored 12 of his game-high 30 points in the first quarter and Justin Robinson added 20 points to lead Lake Catholic to a 70-50 win over Kirtland in the first round of the 2014 Mentor Hoops Holiday Tournament at Mentor High School.

The Cougars, 6-1, advanced to play Mentor in Saturday’s championship game while the Hornets will play Riverside for third place.

Fitzgerald’s big night was only part of the problem for the Hornets, who dropped to 3-2 overall. Lake Catholic’s zone made it difficult for the Hornets to operate their offense and they also struggled to break the Cougars’ press.

“Tough shooting and we played at their pace,” said Kirtland coach Nick Gallo. “Matt (Moran) does a nice job with those guys of getting them ready to play up and down and that 2-2-1 kind of hurt us all night. We got it past half court and then we turned the ball over and were sloppy with the basketball.”

Kirtland’s Matt Grazia opened the game with a short jump shot but Fitzgerald responded with the first of his three first quarter 3-pointers to put the Cougars up 3-2. Sam Skiljan, who scored a team-high 14 points, responded with a layup that gave Kirtland a 4-3 lead. That was the last time the Hornets held the advantage.

Fitzgerald scored nine of Lake Catholic’s next 16 points and the Cougars led 19-11 after the first quarter.

Robinson heated up in the second quarter. He scored seven of his 20 points in the final four minutes of the first half to put the Cougars up 37-25 at the break.

Lake Catholic opened the second half with a 9-0 run to push its lead to 21 points but the Hornets never quit.

Tommy Loncar scored seven of his 12 points in the final half of the third quarter to pull Kirtland to within 53-38 heading into the fourth.

“I thought Tommy played a better basketball game for us,” Gallo said. “He missed a couple early but he was rebounding and he gave a better effort in the second half. He’s just got to be a step quicker for us. That’s a key for us defensively. He did a better job on the ball screen action for us defensively.”

Evan Madden opened the fourth quarter with a 3-pointer but Fitzgerald and Robinson combined to score 10 of the next 11 points to put away the Hornets for good.

“They’re a good basketball team,” Gallo said. “Fitzgerald had 30 and Robinson had 20. We played even with those two guys but we’ve just got to play better. That was game five for us. We’re going to figure it out. I’m still confident.”

Skiljan led the Hornets in points and in hustle plays.

He outran Robinson from one end of the court to other to recover a loose ball and converted it into an easy layup.

“Sam, he’s just a warrior that guy,” Gallo said. “Him beating Justin Robinson down for that one ball, that’s just who he is. He’s such a dependable player. He’s the core and heart of this basketball team. We go as he goes. We need him going forward and I think those guys will continue to feed off him energy-wise.”

Cole DiFabio scored 11 points for the Hornets and added 11 rebounds to complete the double-double.

“There were some positives out there,” Gallo said. “We want to play fast too but we’ve got to play fast and run to score versus running out of control. I think we’ve got to run in our lanes more and just find lineups that work for us to run.”