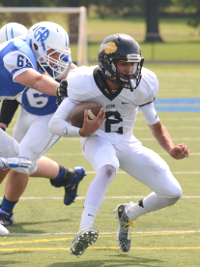 Bison come up short in shootout at Gilmour Academy

Beachwood’s football team got off to a fast start in Saturday’s nonconference game against Gilmour Academy on Saturday. The Bison built a 32-18 lead after three quarters but couldn’t hold off the big play Lancers in the second half in a 46-40 loss at Weber Stadium.

“It’s tough,” said Beachwood second-year coach Mike Gibbons. “It’s one of those games where you wish you could have gutted it out to get a win and get out of there. We’ll live to see another day, but to get out of there with a win was our mindset. Some things happened there at the end and give them credit.”

After Beachwood’s Ronald Jones recovered a Gilmour Academy fumble at the Lancers’ 10-yard line, Max Balazs carried four Lancers into the end zone to give the Bison a 6-0 lead.

Balazs then connected with Nate Hamilton on 3rd-and-10 for a 63-yard touchdown that put the Bison up 12-0.

Balazs threw for three scores and ran for one in the game.

“Max is a tough player,” Gibbons said. “He’s a guy that you really know what you’re going to get from him day in and day out. He’s a tough kid running the ball and throwing the ball. He’s a gamer. People use that expression a lot, but he’s definitely a gamer. He goes out and makes something happen. He’s exciting to watch.”

A Beachwood turnover gave the Lancers the ball near midfield and Gilmour quarterback Connor Lesko threw an 11-yard touchdown pass to Nick Regalbuto on 4th-and-10 to cut the Bison lead to 12-6 with 7:14 to play in the first half.

Balazs and the Bison answered with a 20-yard touchdown to Jones, who caught the ball at the Lancer 9 and went in untouched.

Jones, a standout on the Beachwood basketball team, is in his first year with the football team.

“Thank God we got him out,” Gibbons said. “He’s a special player. He’s 6-3, 220 pounds and has all the ability in the world. He’s a collegiate player, a scholarship type player. We are definitely glad that he came out this year. He was big today and he’s going to be big for the rest of the year. He was definitely one of the bright points today.”

Lesko kept the Lancers in the game with a 7-yard run to cut Beachwood’s lead to 18-12 at halftime.

The teams traded second half touchdowns until Gilmour stole the momentum midway through the fourth quarter.

Beachwood’s Greg Johnson scored on a 1-yard run to open the third. Lesko responded with a 65-yard touchdown run for the Lancers.

Johnson then recovered a Gilmour fumble and returned it 30 yards for a touchdown. Again Lesko answered, this time with a 12-yard scoring run to cut Beachwood’s lead to 32-26.

Balazs then gave the Bison some breathing room with a 23-yard touchdown pass to Hamilton to put Beachwood on top, 40-26.

It was all Gilmour after that.

Zaire Webb returned the ensuing kickoff 70 yards for a touchdown and Jonathan Abrams later scored from two yards out to tie the game at 40 with 2 minutes, 13 seconds left in regulation.

The Lancers then came up with the play of the day when Chase Teriaca recovered the fumbled kickoff and returned it 15 yards for the game winning touchdown.

“We weren’t able to close out the game,” Gibbons said. “That’s the frustrating thing. We had many opportunities where we were up. We had three different times where we had a 14 or a two touchdown lead at least and we weren’t able to stop them and keep our momentum going. We kept letting them back into it and then at the end we just ran out of ammo and the kids were done.”