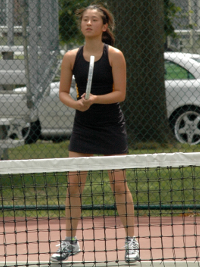 The return of senior captain Jessica Tall at first singles helped the Beachwood girls’ tennis team win its first match of the season.

Tall dropped her match, 6-0, 3-0, but having her in the lineup allowed head coach David Cole to strengthen his lineup and that resulted in a 3-2 win over Gilmour Academy on Tuesday.

“We’ve been without Jessica, one of our captains, so that made it kind of hard,” Cole said. “Today was her first match back and that gave us a little more depth in the lineup. That’s what made the difference.”

Kathleen Fullerton lost at second singles but the rest of the Bison pulled out wins to decide the match.

Freshman Gabbi Rodriguez won at third singles, 6-2, 6-0, and senior Caroline Stern and freshman Erica Gross won at first doubles, 6-1, 6-0. The match came down to second doubles where Maya Peleg and Lynn Jiao pulled out a 6-2, 5-7, 6-0 victory.

“I thought (Peleg and Jiao) played OK,” Cole said. “I was not pleased with their energy in the second set and I had a little chat with them after the second set. They came out reenergized and won the last set, 6-0. We talked about them playing with focus and energy and they cruised to the win. It came down to that. Everyone was watching.”

Despite her loss, Fullerton continues to show improvement.

“She’s been a great addition to the team. She did not play last year,” Cole said. “She’s a very good player and has gotten a lot better. She’s going to be a two-year contributor to the varsity.”

Rodriguez has played doubles but moved into the third singles role and showed she can help the team win, regardless of her role.

“She’s a freshman with a huge future in front of her,” Cole said. “She has been successful at doubles and today was successful at singles. Gabbi and Erica (Gross) will be great for the program.”

Gross and Stern won their match on Saturday at Geneva and have gained momentum as they have become more familiar with each other.

“I’m starting to really like them as a team,” Cole said. “They have a lot of confidence and trust in each other, which is really important.”

Beachwood plays at Hawken on Wednesday and hosts Mentor on Thursday.

“We do play a brutal schedule,” Cole said. “The direction I have is to get the girls ready for the postseason, so we play a tough schedule.”