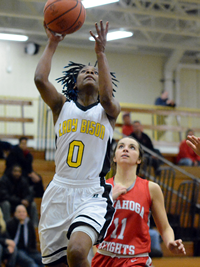 Bison driven by near misses

Beachwood head coach Mike Coreno and his players are still haunted by Olivia Besancon's buzzer-beating 3-pointer that lifted Smithville to a 38-36 win over the Bison in the Division III regional championship game last March.

It was Beachwood’s second straight loss in the Elite Eight and both of those setbacks serve as the motivation for the Bison entering the 2014-2015 season.

“I think that the drive for the kids who have lost two times in the regional finals is really big,” Coreno said. “The one thing I do notice about this team, this team is a better defensive team than what we’ve had the last couple of years.”

That defensive improvement will play a big role in Beachwood’s success this season, especially early on as the Bison work to replace all-state performers Mikah Aldridge and Aneisha Hardin, two of the team’s top scorers.

Coreno expects the bulk of the scoring to come from senior Aryana Jackson, a 5-foot-9 guard who averaged 14.7 points, 3.0 rebounds and 2.3 steals per game last season. Jackson, who signed with Texas A&M-Corpus Christi, earned all-conference and all-district honors and also scored the 1,000th point of her career last season.

Sharing the ball last season with Aldridge and Hardin has helped Jackson to develop into a better player.

“This year we made her a captain in the summer and she’s accepted that role well. She’s working with the other kids and her team concept obviously has improved by leaps and bounds just because of playing on that team last year,” Coreno said. “We’re going to look to her to be the leading scorer and she’s got to be the leader. Her team mentality is just really helping us with the growing pains that we’re going to go through replacing Mikah and Aneisha.”

Natalie Hill, Beachwood’s only other senior, should help pick up some of the points lost to graduation.

The 5-foot-11 forward will provide the Bison with a dominating presence under the basket on both ends of the court, which should help the overall team defense and leave the Bison with an outlet in the paint.

“She’s going to pick up some of the slack scoring that we graduated because she’s going to be able to score in the post,” Coreno said. “We’ve been able to score in the post, (graduated senior) Christina Oden was undersized in the post but she was physically strong. She’d have games where she’d get 8, 10, 12 points but I think Natalie is a double-double every night because she is very athletic and she rebounds well. She’s got some good post moves and she can also come out and knock down the 12 to 15 foot shot which will help us spread the floor out. Defensively, the fact that she can guard the rim for us now better than we have in the past will help us.”

The 5-foot-7 guard averaged nearly 30 points per game as an eighth grader at Beachwood Middle School but she’s also a dynamic ball handler with a high basketball IQ.

“What Taylor brings to us is similar to what Mikah brought to the table from the toughness and the basketball knowledge standpoint,” Coreno said. “Taylor has played so much basketball it’s almost like she’s not a freshman. She’s going to make mistakes, and I have to understand she’s going to make mistakes, but she hasn’t made many. She’s definitely not making the typical freshman mistakes. Her mistakes are going to be of the aggressive nature, trying to score when we should be trying to make another six passes before we try to score.”

Coreno will count on a group of veterans to round out the starting lineup.

“Jada Stevens was our leading rebounder last year. She averaged seven rebounds a game last year at 5-8 against a pretty tough schedule,” Coreno said. “Maurina and Jaelyn bring a ton of speed to the team. When we put our first five on the floor it’s going to be the fastest team we’ve ever had. If we have the ability to rebound well and get the ball out, Maurina finishing, Jaelyn finishing, Taylor running the point and everything, I’m hoping for some more fast break points.”

Junior Jada Washington, a 5-foot-4 guard, and sophomores Jamie Frayman, a 5-foot-6 guard, and Paige Safenovitz, a 5-foot-5 guard, will see minutes off the bench.

“My big concern is we don’t go real deep,” Coreno said. “The big concern is going to be when we have to play half court but from a speed aspect and trying to get up and down the court I think this team might be defensively better and faster than any team we’ve had.”

That lack of depth will be a challenge for Coreno, especially early in the season as the five players on the court develop into a cohesive unit.

“We’ve got to pick our spots,” Coreno said. “We can’t go and try and run somebody out in the first quarter or second quarter and have no legs in the third quarter and fourth quarter. We’re going to have to be a half court team and a running team mixed together.”