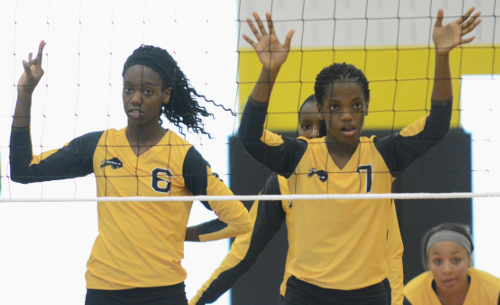 The Bison on Tuesday defeated Hawken, 3-0, to improve to 2-1 on the season under first-year head coach Sarah Schoenhagen and her staff of Kiara Watkins and Shaina Bryan.

It was Beachwood’s first win over Hawken in over five years.

While the win was a big one, Schoenhagen was more excited about her team’s ability to bounce back from its five-set loss to Kirtland last week.

“That says a lot,” she said. “I think they’re used to losing and giving up. For them to be able to fight back and bounce back from emotional loss like that and sweep the next team it says a lot about their character and how much they want to win.”

“Overall, their energy level and intensity was a little down,” Schoenhagen said. “They were not as energized as we would want them to be but they won in three and pulled it out. I think in all three games we were down at some point and they were able to fight through it and win it, so we were happy.”

“She plays consistently well,” Schoenhagen said. “We do look to her to step up and really help the team on offense and defense. So far she has stepped up to the plate.”

“We told her that her grade level doesn’t matter,” Schoenhagen said. “She has as big a role as everyone else on the team. She has come in proved herself as a strong player and a sound player for years to come.”

“She stepped up today,” Schoenhagen said. “She didn’t get a lot of playing time last game but the last couple of practices she’s stepped up and did what she had to do. She did her part today.”

The Bison travel to Shaker Heights on Wednesday.