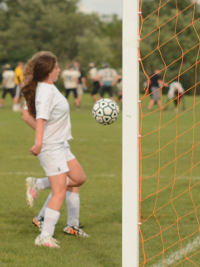 Beachwood’s Jaime Rotsky was in the right place at the right time to score the first goal of the game in Tuesday’s rivalry match with visiting Orange. Unfortunately for the Bison, the Lions scored the final two goals of the contest in a 2-1 win over the Bison.

The Bison dropped to 1-3 on the year.

“I think we could have done better,” said Beachwood coach Tom Fowler. “Our passing game, our passing percentage, was not good. The passing game tends to suffer under pressure and that’s something we have to resolve.”

Rotsky’s goal came midway through the first half when Hannah Kahn’s direct kick hit off the crossbar. Rotsky bounced the rebound off her chest and into the back of the net.

“That was a very nice finish,” Fowler said. “A little bit of that is we do have a little more idea of playing forward early and that’s been a big theme for us this year. We’re a little less defensive than we were last year. I’m happy to see signs of that in the girls. We just have to get back to practice and keep working it out.”

Beachwood’s lead was short lived as Orange’s Cori Schreibman cut past two Bison defenders and found the left corner of the net just over a minute later.

The two teams then traded possession of the ball to close out the half.

“When you win the ball you have to keep the ball and that’s something we’ve had a problem with,” Fowler said. “We’re trying more this year to play forward more early because that’s not something that we’ve been good at. We’re a little bit more serious in defending. We’ve got a couple of slide tackles that were totally clean, really good. I’ve never seen that before so I’m happy about that.”

Carney Blake scored the decisive goal for the Lions in the second half and the Bison never had the chance to tie the game.

“At the end of the day we’ve got to string more passes together,” Fowler said. “We were a little bit disappointed in that. We had too many turnovers. We win the ball and then we end up chasing it back to our own goal. A little bit of that is our inexperience.”

Freshman Zoe Winger had four saves for the Bison.