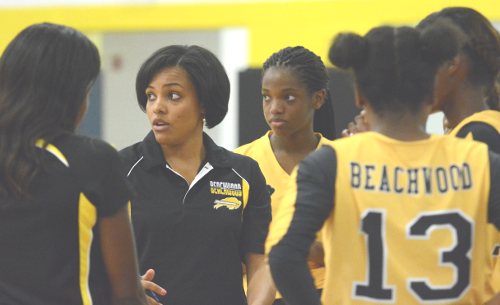 Beachwood’s volleyball team struggled early and never recovered in a 3-0 loss to Cuyahoga Heights on Tuesday.

“It’s a tough one,” said Beachwood coach Sarah Schoenhagen. “The first game we lost by two and we made nine errors. I think they were a little bit nervous because it was a big game.”

The loss dropped Beachwood’s record to 3-2 on the year.

Beachwood jumped out to a 13-3 lead in the second set but couldn’t put away the Redskins.

“Their server went up and got three straight points and things seemed to fall apart,” Schoenhagen said. “From there it was kind of downhill. It was 14-14 when she got done serving and our confidence just dropped.”

Valisha Watkins led the Bison with 8 kills and she tied Jaelyn Pounds for the team lead with 8 digs. Pounds posted a team-high 11 assists and Shaneice James had 7 blocks.

The Bison have to put the loss behind them as they host Western Reserve Academy on Wednesday and travel to Wickliffe on Thursday.