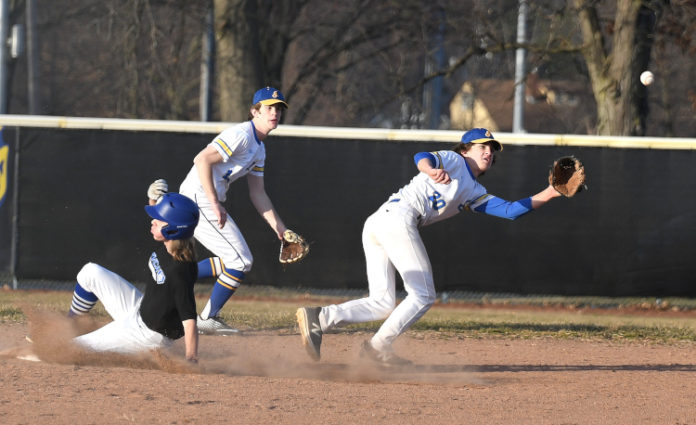 Independence’s baseball team took to the field on Wednesday for the first time in two years.

The Blue Devils learned a lot during their scrimmage with Cuyahoga Valley Christian Academy and are now better prepared for the 2021 season.

A two-year hiatus presents a unique challenge for every team, but Independence is taking it all in stride.

“With the right mindset, there’s an opportunity to improve around every corner,” said Independence coach Jim Crooks. “Independence High School baseball has looked at every chance to practice and workout during the offseason and preseason as an opportunity to improve and fine-tune the abilities of the players in our organization, even in the pandemic environment. When looked at through this lens, players have worked hard to earn their spots in the starting rotation, or everyday role, in the lineup. For the most part, our team has remained healthy and that’s been a positive thing. Adapting? It’s the new norm, and the coaches and players in our organization have pre-dispositioned their mindset to be positive, regardless of what’s happening in the physical world around us.”

It’s that positive mindset Crooks hopes will enable the Blue Devils to improve upon their 10-10 record from 2019 despite returning just one starter from the 2019 season.

“Independence will take the field each and every game expecting to put ourselves in a position to win,” Crooks said. “We’ll combine the leadership and talent of one returning all-conference player in Connor Blum, with some emerging younger talent. Expectations are high for the 2021 campaign. Independence is on a mission to win games and to do so with honor and a positive and passionate approach to playing.”

Blum, one of a handful of seniors in the projected starting lineup, earned second-team All-Chagrin Valley Conference honors in 2019.

He’ll be counted this season to continue to shine with the bat in his hand and in his position at shortstop. But, he’ll also fill a role as one of the team’s leaders.

“He was among our team’s best as a sophomore when the Blue Devils last took the field two years ago,” Crooks said. “Now as a senior, the team will look to Connor for his reliable and sharp play at shortstop and timely, consistent, and powerful bat in the lineup. Connor is a quality all-around player.”

Juniors Casey McGhee and Ashton Lerz also are expected to play key roles for the Blue Devils this spring.

McGhee is a second baseman and pitcher and Lerz will play third and pitch.

“Junior Casey McGhee is an aggressive and fundamentally sound player who has the potential to make a big impact at second base, on the mound, and in the lineup. What the team enjoys most about Casey is his baseball IQ, constantly reading situations in the field, at the plate and on the bases, and using his skills to take advantage of opportunities and help the team,” Crooks said. “During the one-year hiatus, Ashton has made a strong move into the Blue Devil starting lineup and will serve as the team’s No. 1 pitcher on the mound and a middle-of-the-lineup hitter. He combines strength, baseball smarts, and an overall positive disposition that anyone who plays or coaches the game would love.”

Sophomore Mike Andryczszyk will play center field and pitch and freshman Cy Jolliffe is projected to start at first base.

“Mike has the potential to be a ferocious player, as our starting center fielder and hitter this year,” Crooks said. “Mike brings a passion for playing as well as an explosive capability in the outfield and at the plate.”

Crooks expects Lerz, Andryczszyk, McGhee, and sophomore Evan Beacher to handle most of the pitching duties this season.

The Blue Devils aren’t unlike other teams in the area.

They’ll face some unique challenges after being sidelined for an entire season last spring, but Crooks won’t allow that layoff to have a negative effect on this year’s squad.

“Challenges are perceived, not real,” he said. “Flipping the mental dynamic to view every day of practice, or play, as a gift rather than a given, has been a real focus of our organization. We as coaches exist in the same orbit with these young men for such a short season of our lives, so we’re instilling skills that will help them to be successful on the field, but more importantly, in the game of life. Some might see challenges around every corner in a pandemic environment. Not Independence. We identify the opportunities around every corner. Mental growth with baseball growth. Individual self-reliance combined with team growth. Exactly how we as coaches and players perceive circumstances thrown our way means everything.”

Crooks’ approach to dealing with those challenges will help the players remain focused on this season, but at the same time, Crooks also knows he has to prepare the players as best as he can to face any adversity they face.

“Independence’s weaknesses, like a lot of teams we’re certain, will be the fact that we lost an entire season and there’s some unproven projected talent who will need to demonstrate their capabilities on the field,” he said. “We’ll overcome those weaknesses by scheduling a top-flight non-conference schedule playing against some of the better teams in our area, regardless of school size or division. In addition, we’ll overcome challenges by flat-out playing. In this pandemic environment, the young men want to get outside and play. That’s our serum for overcoming any perceived or real weaknesses.”

Independence’s success begins with overcoming the mental challenges the team will face and then it comes down to the players making plays and the pitchers hitting their spots.