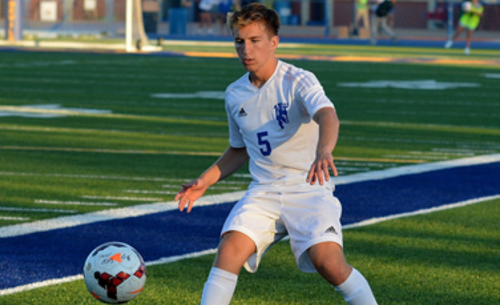 Oberlin’s Jack McMillin scored in the 10th minute to give the Phoenix an early 1-0 lead but the Blue Devils scored seven straight goals to advance to their first district final since 2011.

“We knew what we were up against,” said Independence coach Ryan MacRaild. “McMillan is All-Ohio, he’s all-Ohio caliber, so we had a game plan for him and there were a few other pieces of the puzzle we weren’t too sure about. No. 6 (Mark Woodson) was out for our last game, so he’s another key component of theirs and Oberlin graduated seven starters last year so we knew there were some gaps.”

The Blue Devils, who improved to 16-0-2 on the year, got a preview of what to expect from Oberlin, the team that knocked them out of the playoffs last year, in a 6-1 win back on Oct. 10.

MacRaild reviewed that game to develop the game plan for the rematch.

“Having played them just three weeks ago, I watched the video from the last game and we tried to pick out spots and opportunities to score and put the plan into place,” he said.

Kunevicius scored his first goal of the night just three minutes after McMillin broke the scoreless tie. Nolan Fields made it 2-1 10 minutes later and Kunevicius added to Independence’s lead with 10:37 left in the first half.

Evan Collins then scored on a penalty kick to give the Blue Devils a 4-1 lead at halftime.

Kevin Mewhinney, Kunevicius and Collins all scored in the second half before the Blue Devils yielded a late goal to close out the scoring.

“We’ve got good players,” MacRaild said. “They’re very driven. They felt a little bit shortchanged last year. Oberlin knocked us out at their place. We had an opportunity there and could not capitalize. We have a group of seniors that is driven to excel and they want to play against the best teams and that comes in the region. Getting to this district final really gives us a chance to prove ourselves.”

Top-seeded Independence will play No. 2 Columbia for the district championship on Saturday at Avon Stadium. The two teams tied, 1-1, at Independence on Sept. 21.

“They’re a little bit dinged up themselves,” MacRaild said of the Raiders. “They’ve got a couple key players out and a couple guys out on cards, but they’ll be well rested and looking back for some vengeance. It will be a little higher level than this one so we’ve got to prepare ourselves and get ready and go over the playbook again and make sure we’ve got everything in the right place.”

MacRaild is confident his team will be ready.

“They know that there are some gaps,” he said. “Getting scored on early in this game, we had to make some adjustments, just mentally more than anything, and physically, to keep up with the pace but they’ve got a goal in mind and they want to get there. It’s not hard to get them motivated.”