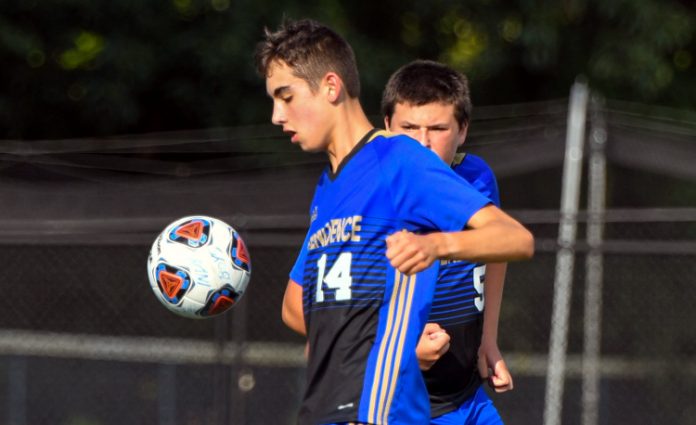 Independence bounced back from its first loss of the season with a 3-2 conference win at Wickliffe on Tuesday.

The Blue Devils, who fell to Lutheran West on Sept. 7, 2-1, had a week off to correct their mistakes and it paid off.

“We had to make up for last week’s loss against Lutheran West and that was kind of the goal,” said Independence coach Ryan MacRaild. “We’ve been off since then so sitting around with the taste of a loss in your mouth is terrible. We’ve been working and refocusing to fix some things. We applied a lot of it today. We only gave up two goals on two corners, so I’m happy with our team defense. We had a couple of nice breakaway opportunities and capitalized.”

Those breakaway opportunities came early as Emmett Stralka scored a pair of goals to give the Blue Devils a 2-0 lead.

“When Wickliffe was pushing up the field on offense, I pressured the defense on a dropped ball which allowed me to slip past the defenders and attack the goalie one-on-one for my first goal,” Stralka said. “The second goal was just being able to jump the passing lane, intercept the ball, and get a clean shot on goal.”

Wickliffe’s Kevin Byrne scored off of a corner kick to cut Independence’s lead to 2-1 but Aidan Coljohn responded off of another breakaway to push the Blue Devil lead to 3-1 at the break.

“We said if we can come out and score the next goal, we’d be up 4-1 and that would give us a nice comfortable lead, but we just couldn’t get that fourth goal,” MacRaild said of his halftime strategy. “Their second corner kick, they were putting a lot of pressure on in the last 10 minutes. They had a real nice service into the box and the only guy that was getting to it was the guy running toward the goal and he got his head on it. That was a well-designed set piece and they executed and got their goal.”

Despite being held scoreless in the second half, MacRailed was pleased with the work of his forwards, Stralka and Coljohn, and Casey McGhee’s efforts in the midfield.

“It was good,” he said of the offensive flow. “Emmett’s speed was good. He had a little tweak at practice yesterday, but he played through it and had some nice breakaways. Aidan had a nice buildup and breakthrough with a great finish. It was nice to see both the forwards get involved. Our midfield played really well in support. Casey dropped back and did a little more distributing like we wanted him to do and he did it.”

With the win, the Blue Devils improved to 5-1 overall and 3-1 in the Chagrin Valley Conference Metro Division.

“As a team, we are still working out where everyone should play,” Stralka said. “Having Jack (Panichi) and Nathan (Bernstein) get early-season injuries left us with some holes to fill. Despite all the shuffling, we are still 5-1 and getting better as the season progresses. It helps that our defense has really been outstanding this year. Braden (Flynn’s) presence shrinks the goal for opposing players, and Joey (Jirmasek) and Charlie (McGreal) are playing fantastic this year. Those three are selfless players who seem to avoid the limelight but are stars to this team. Winning this game means that we have some contention for the conference title, which is huge.”

Independence travels to Andrews-Osborne Academy on Thursday and then hosts Holy Name on Saturday.

Wickliffe dropped to 4-3. The Blue Devils travel to Madison on Thursday.