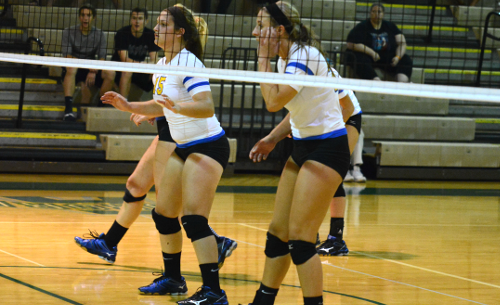 Independence’s volleyball team took another step toward returning to the regional tournament for the second straight season with a 3-0 win over Columbia in a Division III district final on Tuesday.

“Check it off the list,” said Independence coach Megan Osysko. “Bring on the next team.”

For the Blue Devils, who improved to 22-1 overall, the one game at a time approach has served them well.

Tuesday’s match wasn’t the best for the state’s seventh-ranked team but the Blue Devils handled everything the Raiders sent over the net.

“Columbia kept the ball in play,” Osysko said. “We did a nice job with it though. We had quite a few rallies back and forth. We did what we do. We put the ball on the floor.”

Megan Screptock led Independence at the net and setter Hallie Zumack made sure all the Independence hitters had their opportunities to put the ball away.

“Megan had a really nice game for us with a lot of kills,” Osysko said. “Hallie did a good job with our hitters. It was kind of the usual for us.”

The Blue Devils have won six straight matches since being swept by Gilmour Academy on Oct. 1. Before they can think about a potential rematch with the Lancers in the Barberton regional they’ll first have to deal with Elyria Catholic.

“We’re approaching it like we’re (the underdog) and we’ll try to play our game and come out on top,” Osysko said. “They have some girls that can put the ball on the floor. We just have to keep them out of system and do our best to not let that happen.”

The district championship game will be played at Elyria High School on Thursday at 7:00 p.m.