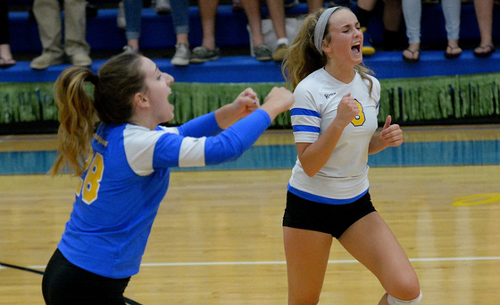 A bump up to the big school division in the Chagrin Valley Conference had no effect on the Independence volleyball team.

“We are all very excited to finally have the conference outright,” said Independence head coach Megan Osysko. “The team has gone through a lot of ups and downs as far as our lineup. It's nice to know we have been able fill the gaps and still prove to be a successful team in the conference.”

The Blue Devils got a boost from the return of Emily Magas. The senior had missed the previous eight games with a foot injury.

She recorded seven kills in the win.

“The team was all very excited to have Magas back on the floor,” Osysko said. “The girls cheered extra when she put her first kill down for the night.”

Maura Collins led Independence with 12 kills and also contributed 14 digs. Hallie Zumack had a team-high 24 assists and also pitched in with four kills, seven aces and three digs. Mallory Trombetta posted a team-high 15 digs and Katie May led the team with four blocks.

The Blue Devils close out league play on Thursday then turn their attention to the postseason. They certainly aren’t overlooking the Eagles or the opportunity to finish league play with an undefeated record.

“We finish 14-0,” Osysko said. “There are no excuses why we shouldn't finish to our potential.”