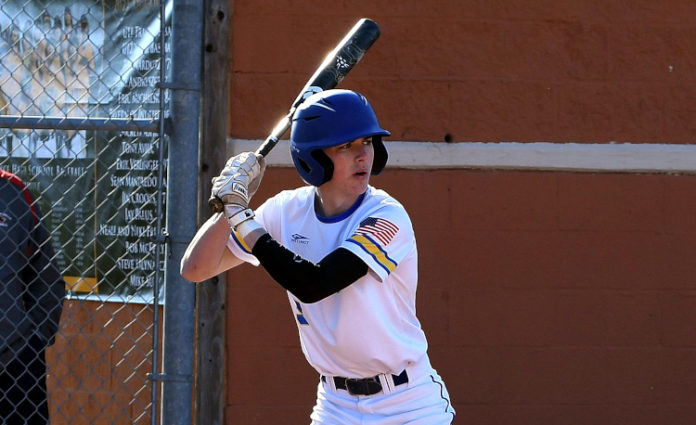 Independence avoided a letdown game following two key conference wins this week by closing out league play with a 9-4 win over visiting Trinity on Wednesday.

After clinching their first conference title with two wins over Beachwood earlier in the week, the Blue Devils added an exclamation point by closing out the conference portion of their schedule with a 10-2 record.

“We’ve just been staying focused all throughout the week, even with the rainouts last week,” said Mike Andryszczyk, who was 2-for-3 at the top of the order. “We’ve kept our spirits high and our mindsets straight. We’re a solid team with a lot of good players; all of us working together is a remarkable force.”

Trinity scored an unearned run in the second and added to more in the third as the Trojans built an early 3-0 lead.

The Blue Devils cut their deficit to 3-2 with a pair of runs in the bottom of the third.

Luke Pascarella started the rally with a one-out single. He moved to second on a passed ball and to third on a groundout. Connor Blum singled home Pascarella and Andryszczyk, who had drawn a walk.

Independence broke the game open with a six-run fourth.

The Blue Devils strung together four hits in the inning and also benefitted from a walk and two errors.

“Since the beginning of the season, energy has always been a key factor for success,” Andryszczyk said. “If one person gets on base, our confidence rises and we all come together and cheer on the guy up to bat. We then just keep the ball rolling with the confidence, continuing to rise, and our energy also continuing to rise throughout the inning.”

Trinity strung together a single and a double to score a run in the fifth but the Blue Devils responded with one in the sixth to close out the scoring.

McGhee, Blum, and Lerz all drew walks to lead off that inning, and Rory Corrigan hit a sacrifice fly to plate McGhee.

Lerz, the pitching hero of Tuesday’s league title-clinching win at Beachwood, led the Blue Devils at the plate with three hits in three at-bats. He also scored a run and knocked in two others.

Andryszczyk finished the day 2-for-3 with two runs scored and an RBI.

He now has five hits in his last two games.

“My key to success is to just always work the pitcher and pick the perfect pitches to hit,” he said. “With the Trinity game today, I knew what to expect from their pitcher and I just had to lay off the off-speed and jump on the fastballs to get on base.”

Aaron Ramm pitched four innings to claim the victory. He allowed one earned run on five hits and fanned three. Blum threw the final three innings. He gave up one run on two hits with seven strikeouts.