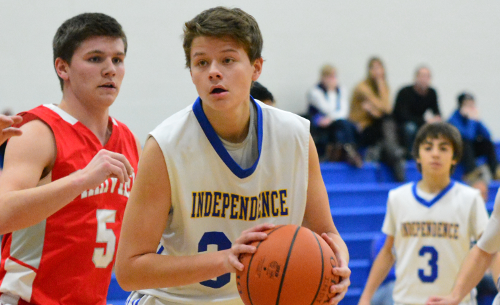 Daniel Mathews scored a game-high 28 points and Independence was 17-of-21 from the free throw line in the fourth quarter in a 70-66 win over Fairport Harding on Friday.

Independence held a 41-35 lead entering the final quarter and every time the Blue Devils would pull away the Skippers would hit a 3-pointer to get back into the game.

“I think again it was a solid effort for the entire game,” said Independence head coach Hugh McMahon. “That’s two games in a row that we were able to give that effort. We were able to withstand a big run by them in the fourth quarter. They hit their last four 3-pointers to keep it close and forced us to hit our free throws down the stretch.”

Mathews was 6-for-6 from the line in the fourth quarter while Kyle Stefanski was 6-for-9, Nick Brunsman was 3-for-4 and Mario Figliola was 2-for-2.

“That just shows an awful lot of maturity just in a week’s time,” McMahon said. “We didn’t hit our free throws down the stretch against Cardinal and let one get away from us by three points. This time we were able to respond to the pressure and put the game away.”

Stefanski finished the game with 14 points and Brunsman and Figliola both scored 10 to give Independence four players in double figures.

“I thought it was balanced really well with four double-digit scorers,” McMahon said. “I liked how we shared the ball. We also had the return of Ryan Dworznik and Matt Terrano from injury. Although a little rusty, they gave a great effort.”

McMahon was also pleased with the defensive play of freshman Jacob Allen, who finished with two points and five rebounds.

The Blue Devils return to action on Tuesday when they host Kirtland. They’ll play a second league game next week on Friday at Hawken.

“I’m very happy with how we’ve matured and come together as a team,” McMahon said. “We are playing our best basketball at this time but there’s always room for hard work and improvement.”