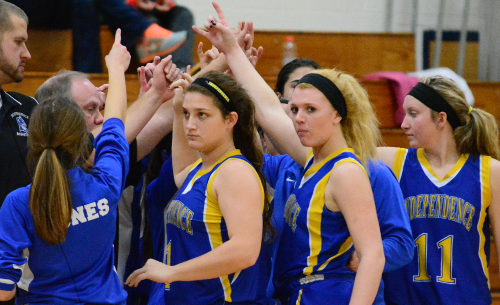 Chagrin Valley Conference scoring leader Deja Winters scored 15 of her game-high 23 points in the first quarter to lead Richmond Heights to a 53-51 win at Independence on Friday. The Blue Devils fought back and nearly pulled off the upset but could never pull ahead late in the game.

Despite the loss, Independence head coach Mike Marcinko saw a lot to like out of his girls.

“We grew today,” he said. “You’re always looking for improvements. You get better then you kind of plateau then you hope to rise again. After the holidays, here’s a step forward, a step up the ladder. We’re very proud of the girls. You hate to lose but too many good things occurred in that game against a very, very good opponent and a very good talent.”

After falling behind 23-15 after the first quarter, the Blue Devils pulled to 31-26 at halftime and trailed just 41-40 at halftime.

Halle Dorko led the Blue Devils with 12 points and Hallie Zumack added 11 but Independence just couldn’t overcome the size advantage the Spartans held in the paint.

“We don’t have a post player,” Marcinko said. “We don’t have a big girl. Zumack, Dorko and Jess (Dmitruk) do a tremendous job and bust their tails for us but they’re not 5-11, 6-foot like those girls are. There are times we’re boxing out and we have position and they just reach over our heads and get a rebound.”

Independence, which dropped to 5-5, had its opportunities in the fourth quarter but never could take the lead against the Spartans.

Nicole Ferrara and Julia Riley both scored nine points for Independence and Victoria Sirna drained a pair of 3-pointers to finish with six.

“The scoring was very spread out,” Marcinko said. “I think part of it was we know we need each other to score. We just can’t give one person the ball like a (Deja) Winters and say get me 15-20. We need each other. This game, because the way they played their zones and their trap, they’re not trying to take away Dorko or Zumack or anyone specific. They’re just trying to get after you. Our gals did a nice job of moving the ball and finding the best person and best available shot prospect in each possession.”

Independence hosts Columbia on Monday then travels to Hawken on Wednesday and finishes the week with a home game against Wickliffe next Saturday.