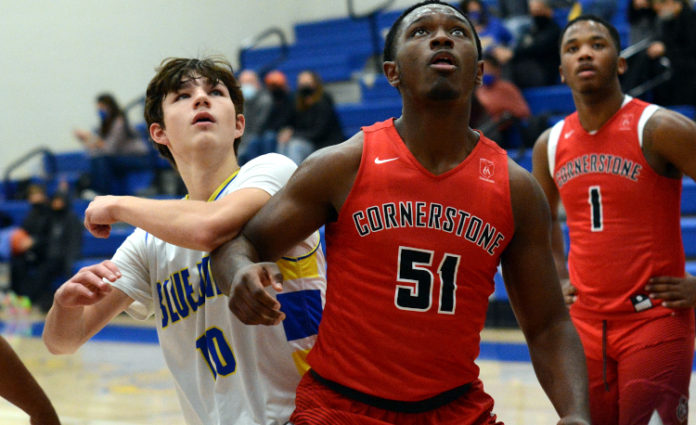 INDEPENDENCE—Playing on back-to-back nights is never easy, especially when a team trails by double-digits early in the contest.

On Friday, Independence trailed Mayfield, 16-3, in the first round of the Independence Tip-Off Classic before rallying for a 68-59 win over the Wildcats.

Fast forward to Saturday’s championship round game against Cornerstone Christian and the Blue Devils once again found themselves down by double digits early in the game. Once again, Independence rallied to take the lead but the Blue Devils couldn’t hold on and fell to the Patriots, 61-59.

“We got in a hole early, just like last night,” Independence coach Kyle Johnson said. “They were up 10 early and that’s been our MO the last two games. It was 16-3 the last game and then today they got up 10 and we had to climb back and win. Against good teams, you’re not going to be able to dig yourselves out of that hole.”

Cornerstone got off to a hot start behind the 3-point shooting of Jamail Spivey and B.K. Kwasniak, who combined to score 57 of the Patriots’ 61 points in the game.

Spivey hit a pair of 3s and Kwasniak scored 12 points in the first quarter as the Patriots built its early lead.

“It’s frustrating when you let two guys score 57 of their 61 points,” Johnson said. “At some point, guys just have to realize who’ hitting and who isn’t. We haven’t been doing a good enough job defensively. We’ve given up 58 and 61 points in the last two games. That’s not going to win us games.”

Casey McGhee hit a pair of 3-pointers in the first quarter to keep the Blue Devils in the game. Eric Mitrisin then added seven of his 11 in the second quarter and Adam Miklovic scored eight of his 12 in the frame to help the Blue Devils rally back to take a 34-30 lead into the locker room.

Cornerstone pulled to within three heading into the fourth quarter and went on to outscore Independence in the fourth, 19-14.

Adding to Independence’s troubles down the stretch, Miklovic picked up his fourth foul with 5:08 remaining in the game.

With him on the bench, the Blue Devils lost one of their best defenders and an inside scorer. Eric Mitrisin later fouled.

By the time Miklovic returned, Cornerstone had pulled to within 57-56. Miklovic quickly scored to make it 59-56 with 1:18 left.

“He does a lot for us,” Johnson said. “He brings a lot of energy and he gets boards and Ds up. When he’s out of the game, it’s tough and then Eric gets his fifth foul late in the game.”

Kwasniak tied the game on a 3-pointer then hit a pair of free throws with five seconds left to seal Cornerstone’s win.

Eric Zygmunt led the Blue Devils (1-1) with 16 points. Miklovic finished with 12 and Mitrisin added 11. McGhee and Matt Richards both contributed with nine and Jack Taliaferro added a bucket.