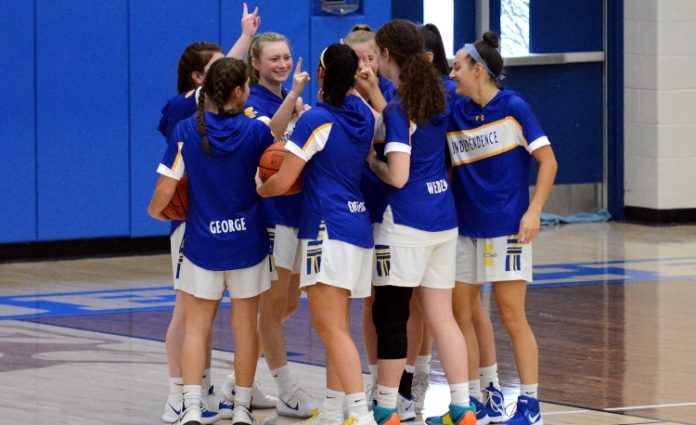 Stepanik made the most of her first opportunity to play this season. Playing well alongside fellow senor Riccela DiGeronimo on their night only added to the night’s excitement.

“It was such an exciting night for me and Kella,” Stepanik said. “I’m truly grateful for everyone that made tonight possible and it was great to get a win on top of it. I was super stoked to go out and play. It’s been a while and I was really excited to play with my teammates again.”

Anna Weber, who finished with 14 points, drained two 3-pointers and added a basket to help Independence build a 13-5 first-quarter lead. Stepanik added 10 in the second quarter as Independence pushed its lead to 33-9 at the break.

“My teammates did a great job of moving the ball around and getting the ball in for me to post up,” Stepanik said of her scoring spree.

Kara DeSmith contributed to the win with six points, Alex Adams added five and McKenzie McMahon and Casey Adams each scored four. Addie Westerburg pitched in with three points and Natalie George and DiGeronimo each finished with two.

It was a slow scoring night for DiGeronimo but she was thrilled to get the chance to celebrate her senior season.

“It’s definitely a crazy and interesting year, but we are grateful to be able to play any games we can,” she said. “It was very nice to be able to celebrate Senior Night considering all the circumstances. I’m blessed to be able to be a part of such a great team for the last four years.”

With the game in hand at the break, Independence emptied the bench in the second half to improve to 4-0 on the year.

“It was a great team win tonight,” DiGeronimo said. “It was exciting to have Madison back on the floor with us. We all had really high energy from the start of the game. Everyone came out and did their part and we were able to get a lot of teammates involved.”