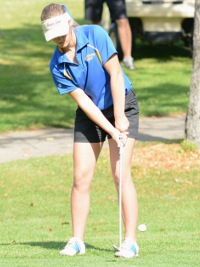 Blue Devils do it again

Independence’s first year of girls golf already exceeded expectations when the Blue Devils finished a surprising second at the Chagrin Valley Conference preseason tournament. On Monday, the Blue Devils turned in another shocking performance when they knocked off several Division I schools to finish third at the Mentor Invitational at St. Denis Golf Club in Chardon.

Notre Dame-Cathedral Latin won the event with a score of 374. Stow was second with a 394 and the Blue Devils finished just one stroke back with a 395. Aurora (401) and Hawken (403) rounded out the top five.

“I was surprised when the scores were added up,” said Independence head coach Karl Schuld. “It didn’t look, especially early on, that we were putting together that kind of round.”

At 5800 yards, St. Denis was the longest course the Blue Devils had played this season and it also provided challenging lies and elevations.

Early on, the Blue Devils struggled to maneuver the course but regained their composure to finish strong.

Sophia Trombetta led the Blue Devils with a 90, which was tied for third overall, and Lyndsay Blum carded a 93. Christina Brunsman (104), Kaylie Kemenyes (108) and Bryleigh Wise (116) all improved their scores on a very challenging course.

“For a lot of our girls, it was a bogey before it even started,” Schuld said. “We weren’t going to be able to reach the green in regulation. In order for them to score, a 5 was basically a good score when you’re playing 370 yard par 4’s. The good golfers have a hard time reaching that. If you have one shot that’s not what you want it to be, it’s hard to reach it.”

Trombetta shot a 50 on her first nine holes and closed out with a 40 to finish among the top three golfers. Blum again played consistently throughout the course, overcoming a few challenges along the way, and the rest of the Independence golfers continued to improve their scores.

“Sophia really came back and fought hard and Lyndsay Blum just keeps going out every match and throwing up a good score for us,” Schuld said. “Christina, that was a really good score for her. She’s only getting better. Kaylie fought all the way through hand didn’t give in even though she had some tough holes at the beginning and Bryleigh is getting better every match. She goes out and never is really satisfied with what she’s done but her score continues to go down. I think she’s lowered her score every match, which is pretty amazing.”

The Blue Devils play Orange at Punderson on Wednesday and will see Kenston and Aurora next week. The Bombers defeated the Blue Devils by four strokes at the CVC preseason tournament.