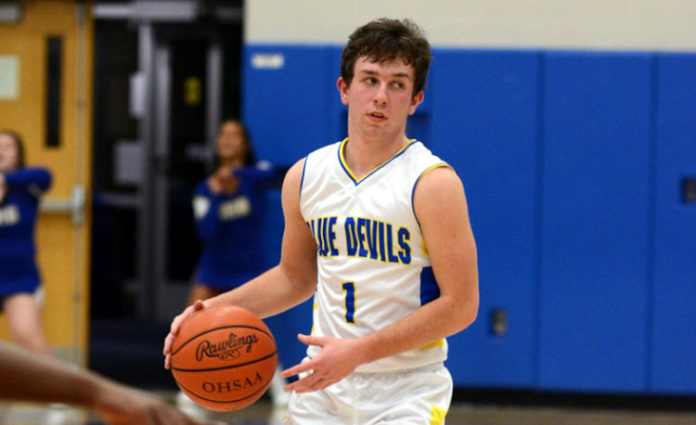 After back-to-back close losses, Independence left nothing to chance in an 84-45 win over Open Door that sealed second place in the 10th annual Joe Labella Tournament on Saturday.

“It was good for us to get that monkey off our back a little bit,” said Independence coach Kyle Johnson. “We’ve been in such tight ball games so it feels good to just win a game at this point and get us moving in the right direction. We have another one on Tuesday and then we have Christmas break, so it was good to get one in decisive fashion.”

Independence led just 17-11 after the first quarter but the Blue Devils dropped 28 points in the second to take a 45-23 lead into the break.

They extended their lead to 67-37 after three quarters.

“I thought we did a nice job of controlling the tempo of game,” Johnson said. “That’s something we haven’t been really good at up until now, which is knowing the fine line between going to try and score but also running our offense. The guys did a nice job of that tonight and we were able to get ball movement and player movement.”

Kyle Zygmunt scored a game-high 28 points to lead Independence to the win. He scored 14 of his points in the second quarter when the Blue Devils began to pull away.

Independence’s defense was equally distributed as the Blue Devils took turns guarding Open Door standout Gavin Dobbins, who collected the 1,000th point of his career on the way a team-high 27.

Dobbins scored 51 points in a win over Mayfield during the Independence Tip-Off Classic two weeks ago, so the Blue Devils knew they had to slow down Dobbins to win.

With the win, Independence improved to 3-4. The Blue Devils travel to Valley Forge on Tuesday.