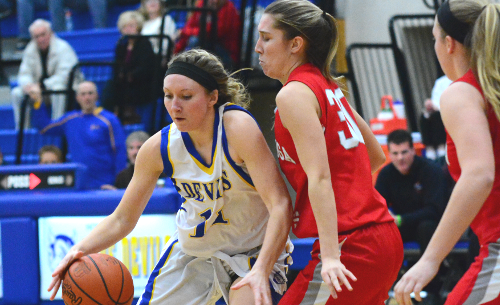 INDEPENDENCE—Cuyahoga Heights and Independence went scoreless through the first half of the first quarter in Saturday’s Chagrin Valley Conference Metro Division showdown. That scoring drought set the tone for the host Blue Devils as the Redskins pulled out a 41-31 win.

Despite a solid defensive effort, the Blue Devils, who dropped to 9-8 overall, never found a rhythm on offense.

“We were scoring challenged today,” said Independence head coach Mike Marcinko. “It felt like there was a lid on the hoop. We couldn’t seem to finish and get any continuity. Part of that is their good job defensively but we just couldn’t find a rhythm one way or another.”

It’s not that the Blue Devils didn’t come up with a few big shots.

“We just couldn’t string them together,” Marcinko said. “A lot of that is due to them working hard defensively and a lot of that is us just not finding any continuity or rhythm in what we were trying to do.”

Defensively, even with Jenna Stegmaier, Cuyahoga Heights’ all-time leading scorer, dropping in a game-high 27 points, the Blue Devils turned in a strong performance.

Stegmaier scored 13 of her points at the free throw line and found it difficult to get an open look at the hoop thanks to the persistence and hustle of Independence’s Julia Riley and Nicole Ferrara.

“When we played them at their place she had one open look,” Marcinko said. “Nicole and Julia and Halle Dorko last time were trading off here and there. This was mostly Julia and Nicole. They were making her earn them. She didn’t in a sense go off on us. It was just a steady drip. She’s their best player and she’s going to get the most touches so she’s going to score. You can give her the ball and tell her to give you 15-20 and you’re going to get 15-20.”

“Collectively, with all we’re going through, I was really happy with the girls,” Marcinko said. “It’s not an excuse but we’re banged up. We’ve got kids living in the training room and they gave us everything they had on one leg, one and a half legs, whatever it is. I’m very proud of the effort.”