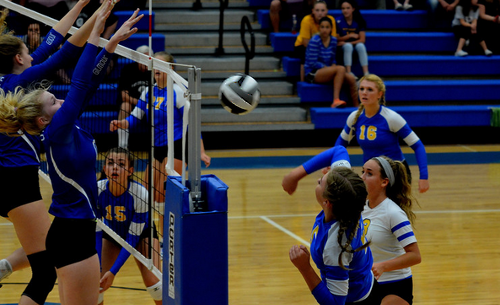 INDEPENDENCE—Wednesday’s non-conference showdown between Gilmour Academy, the top-ranked team in Division III, and No. 16 Independence was everything it was expected to be, even if it didn’t turn out the way the Blue Devils hoped it would.

“I’m proud of the whole team and the way they performed,” said Independence coach Megan Osysko. “I am so happy that my girls competed. Everyone stepped up tonight.”

The Lancers, who improved to 12-2, never went on the long runs to put the Blue Devils away. They had to earn every point, even when Independence lost senior Emily Magas to injury midway through the second set.

“Obviously, we had an unfortunate injury but two freshmen came in and did their job,” Osysko said. “That’s what we need, for everyone to do their job.”

Magas finished second on the team with six kills.

In her absence, Maura Collins picked up the slack along with freshmen Mia Coudriet, Lexi Prokopius and Amy Ksiazka. Collins led the team with 13 kills while Coudriet had four, Prokopius had three and Ksiazka recorded one. Hallie Zumack chipped in with four kills.

Even without Magas, the Blue Devils competed with the top-ranked Lancers.

“It shows their mentality; that they’re willing to compete,” Osysko said. “Like I’ve been preaching from the start, you’ve got to step in and do your job. That’s all I’m asking. I don’t expect you to play someone else’s position, just do your job.”

Collins made it difficult for Gilmour to score.

She was all over the court diving for loose balls to keep the Blue Devils in the hunt. Her effort, along with the leadership of Zumack and Mallory Trombetta, helped steady the Blue Devils without Magas on the floor.

“She always runs through walls for us,” Osysko said of Collins. “She brought the team together so well, her and Hallie and Mal. They kept the rest of the team together having three or four freshmen on the floor at times. We really depended on them.”

The Blue Devils, who dropped to 8-4, resume Chagrin Valley Conference play at Beachwood on Thursday looking to snap a three-game skid.

They’ll go into that game knowing they can compete with anyone.