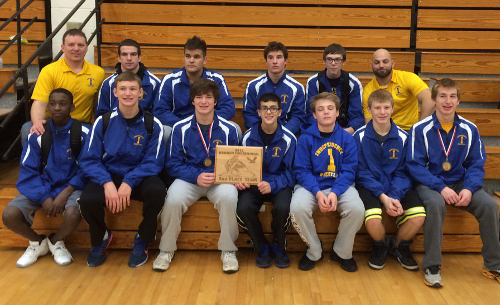 Independence’s Matt and Nick Mroczynski both won individual titles and six other Blue Devils placed to lead the team to a second place finish at the 2015 Hawken Invitational on Saturday.

The Blue Devils opened the tournament on Friday by winning 14 of 17 matches.

“I was extremely pleased,” said Independence coach Ken DeAngelis. “That kind of set the stage for us for a pretty good weekend. Our focus all year has been on effort and aggressiveness. We have a young group and we’re trying to teach them how to win. We’ve been working real hard all year and my goal for this tournament was I was hoping for Top 5. They far surpassed my expectations.”

Mroczynski pinned his first two opponents then defeated Hawken’s Matty Baratz, 5-2, in the semifinals. He closed out his championship with a 1 minute, 43 second pin of Warrensville Heights’ Pierre Savage.

“He probably looked the best on our team,” DeAngelis said. “His offense is really coming together. You can see he has a plan out there. He knows what he’s looking for and he’s learned how to wrestle. He expects to win when he goes out there.”

Nick Mroczynski, a sophomore, had a pin and a major decision in the preliminary rounds. He won by default in the semifinals then pinned Grand Valley’s Clayton Takacs midway through the second period in the championship bout.

“Nick probably one of the most talented kids on the team,” DeAngelis said. “He’s a two-time youth state qualifier and a junior high state qualifier. He’s got success waiting for him at the high school level. He’s just got to decide to put it together. He had a nice weekend. His finals match he went out and took him down with a pretty single leg and then a pretty fireman’s carry and pinned him off of it. He was just very aggressive. He’s starting to come into his own.”

Kyle Corsi and Drew Benos both finished second for the Blue Devils.

Corsi, a freshman, received a bye in the first round at 120 then recorded his first high school pin. He won by forfeit in the semifinals before losing to Brecksville’s Clayton Catanzarite in the championship bout.

“He had a nice draw,” DeAngelis said. “He won a match and then the kid we were supposed to have in the semifinals didn’t make weight. We ran into a pretty tough kid in the finals from Brecksville but I’ve got four freshmen this year and they’re all stepping in the lineup and contributing.”

Benos, a 145-pound senior, went 3-1 with two pins and a technical fall before being pinned by Grand Valley state alternate Cody Rhoads.

“Cody was controlling the match,” DeAngelis said. “It’s one of those matches, it’s early on in the year and it’s a kid you’re going to have to beat if you want to get to Columbus so you try stuff to see what works and you go back and fix what didn’t work. Hopefully we have a better game plan the next time we’ll see him.”

Kucera, a junior high state qualifier, weighed just 106.2 pounds but jumped up to wrestle at 113.

“He’s really a 106-pounder but we put him at 113 for this tournament,” DeAngelis said. “He will probably be at 106 for most of the year. He’s a tough kid. We were definitely outsized in the two losses that we had.”

Goldwin showed a lot of promise at 106.

“He’s a little guy. In two or three years from now he’s still going to be a 106-pounder,” DeAngelis said. “He lacks some experience but he’s got the heart of a lion and hates losing. You can see as long as he sticks with it there is success in his future.”

Rossi ran into a familiar foe in the 126 pound semifinals.

He opened the tournament with two pins then dropped a 4-2 decision to Brecksville’s Jack Brocco, an Independence resident who was Rossi’s drill partner on the Brecksville club team.

Rossi then lost in the consolation semifinals but rebounded with a pin in the fifth place match.

“(Brocco) was Nick’s drill partner for the last three or four years on the Brecksville club team so the two kids knew each other,” DeAngelis said. “We were winning the match with probably 30 seconds left in the third period. He got taken down to lose the match. It’s tough as a freshman to bounce back mentally from something like that so I was glad to see Nick end the tournament with a nice win and give us something to build on for this weekend.”

Clymer, a junior, recorded two pins—including a 20-second fall in the first round—to reach the semifinals. He suffered a minor shoulder injury in his quarterfinals bout and DeAngelis opted to default the rest of his matches, which left him in sixth place at 152 pounds.

“He won some nice matches,” DeAngelis said. “He pinned both his kids on Friday but he tweaked his shoulder just a little bit. It wasn’t anything serious but we decided to pull him for precautionary reasons. It’s early in the season. He wasn’t happy with me for pulling him but we’re erring on the side of caution there.”

“He’s probably up a weight class,” DeAngelis said. “He lost a match in the first round then won a 4-3 tough, hard-nosed match in the second round and then we lost 8-6 in the third match. The thing I liked about that is he was fighting until the end.”

Stasek wrestled 225 as a freshman and bumped up to 285 for his senior season. He recorded two pins in the tournament before losing 5-3 in the consolation quarterfinals.

“Fortunately for him he got to wrestle Paul Deely all last year,” DeAngelis said. “Unfortunately for him, he had to survive in the room but by surviving in the room he came back with a much tougher attitude this year. He pinned his first kid. We were in a 1-0 match in the second round with the No. 1 seed in the third period and we got caught and pinned. It was a much closer match than it seemed. After that we were winning the match against the Wickliffe kid and we just got off balance and went to our knees and couldn’t recover. He actually had a really, really good weekend.”

The Blue Devils host the North Coast Classic on Friday and Saturday.