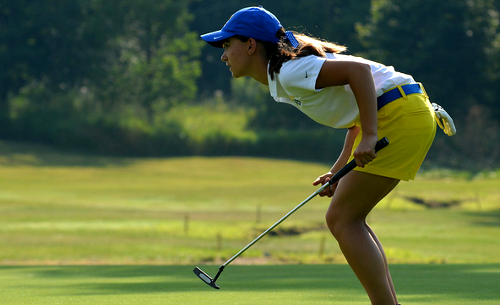 Blue Devils gearing up for postseason

Independence’s girls’ golf team is in just its second year of existence but the Blue Devils already have emerged as one of the top programs in Northeast Ohio.

Last Monday the team finished fifth at the Laurel Invitational at Canterbury Country Club then defeated Division Padua on Thursday.

“One of the teams that beat us at the tournament was Massillon Jackson, the defending Division I state runner-up,” said Independence coach Karl Schuld. “We lost to Magnificat by just a few strokes, Jackson, Walsh Jesuit and NDCL, so we were very happy with that. The kids golfed well on a tough course and it helped set us up for the win over Padua.”

Walsh Jesuit was 10th in the Division I state tournament last season while NDCL was third in Division II.

“Padua is a very solid Division I team that has had some really good scores this year,” Schuld said. “They had two seniors at No. 1 and 2, which was good competition for us.”

Sophia Trombetta led the team with a 36. Lyndsay Blum fired a 41 and Bryleigh Wise shot a 42.

“Bryleigh has started to come back around,” Schuld said. “She had a little stretch where she had a hard time controlling the ball but she’s such an athlete. She’s just plugging away. I think she just went out and had fun.”

Madeline Mindzora finished the match with a 48 while Kaylie Kemenyes and Maddie Harper shot 50 and 53, respectively.

Schuld believes his team is ready to kick off the postseason.

“We’re very happy with where we’re at,” he said. “We played a very rigorous schedule. We just finished up our eighth tournament. That’s a lot more than most teams play thanks to the support of our school district to help us out with that. It’s definitely paying off. These kids have been on all kinds of courses, all kinds of conditions. When they get back on courses that are a little bit more manageable they’re very confident. By design, all of that has helped the kids have confidence knowing that if they can survive courses like that they can play well at the normal courses we play.”