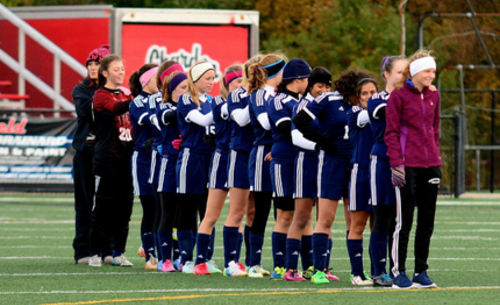 The only similarity between Thursday’s sectional championship game between eighth-seeded Independence and No. 1 seed Cuyahoga Heights and the regular season matchup between the two teams was the final score.

Cuyahoga Heights won both games 7-0 but the Blue Devils played a much better game in the postseason loss.

“We put in an offensive-defensive game plan and all of a sudden we were breaking through offensively and got a couple shots on goal,” said Independence coach Bryan Less. “They got a couple quick goals but it was much better than the first time we played them and lost 7-0. It was the same score at halftime but it was a much different feel to the game. We actually had some shots on goal and had some possession. It was more fun. We actually had some opportunities.”

Cuyahoga Heights improved to 15-1-2 while Independence finished the season at 2-15.

Independence’s struggles this season began with key injuries and a lack of experience in the lineup. That forced Less to put his best and most experienced players in the middle. That strategy paid off in the form of several shots on goal, something that didn’t happen against the Redskins in the regular season.

“My game plan was my inexperienced outside mids were going to stay wide and then the three of them were just going to go through the middle,” Less said. “It almost worked. We were dribbling right through their defense. We came up short but we had a few shots on goal.”

The optimistic side of Coach Less had him looking ahead to next season when all but two girls will return.

“I’ve had teams twice this size and we’d lose half the amount of injury time. We had a full lineup for 15 minutes this year, that’s it,” he said. “I was already talking to some of the girls on the sidelines during the game about what we’re going to do next year.”

Juniors Ashley Henderson, who missed several games this season and departed Thursday’s game against Cuyahoga Heights midway through the second half with an injury, and Julia Gutermuth both will return. Henderson led the Blue Devils with six goals and two assists while Gutermuth scored four times and assisted on another.

Emily Reed is the only other underclassmen with a goal.

“I told them hopefully they remember we have to do this next year,” Less said. “Ashley and Julia were the forwards and Emily Reed was the center mid. I don’t see why that’s going to change. The three of them were leading the offensive charge.”

Olivia Jones, the only other Blue Devils to score a goal this season, and Ellie Clymer closed out their high school soccer careers on Thursday.

Less credited their hard work and dedication for their rapid development over the past three seasons.

“They worked their tails off this year,” he said. “They got a lot better this year. Both of them didn’t come out until their sophomore year and they both were integral parts of this team and previous teams. Ellie was a starter all of last year and Olivia started about half of the games last year. They turned themselves into nice solid, little players. I’ll miss them next year.”