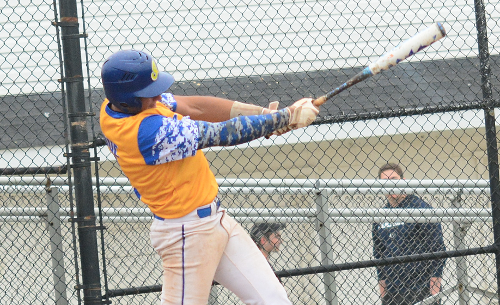 Two tough losses to Beachwood earlier in the week left the Independence baseball team pining for a win.

“They were hungry to have a win,” said Independence coach Mike Gruber. “They were not happy the last two days losing. We wanted to get out strong. It was good to get a win.”

After a scoreless first the Blue Devils jumped out to a 3-0 lead in the second when Danny Pumper drew a leadoff walk and scored when Jake Watroba reached on an error. Steven Schmetzer, who was 3-for-4 with three runs batted in, then doubled to make it 2-0. Schmtezer scored on Daniel Mathews’ single.

The Tigers responded with four runs of their own in the bottom half of the inning and made it 5-3 in the fourth.

Independence took the lead for good with six runs in the fifth.

Mathews singled to start the inning and stole his way to third. Nick Niro walked and James Schmetzer singled home Mathews. Devyn Skoczen then reached on an error and Pumper walked. Steven Schmetzer and Ricky Dolejs then hit back-to-back singles to make it 9-5.

The Blue Devils added five more in the seventh to seal their win.

“Pretty much every guy in the lineup got a hit,” Gruber said. “We started stringing two and three hits in a row and we were smarter on the base paths. We were able to get those timely key hits we haven’t been able to get the last few games.”

Mathews finished the game 4-for-5 with three RBI and two runs scored and Steve Schmetzer and Dolejs each had three hits for the Blue Devils.

James Schmetzer allowed five hits and just two earned runs in six innings of work to pick up the win.

“James pitched a really nice game for us today,” Gruber said. “He had about 50 pitches going into the third inning and then he pounded the zone and got some quick outs. He went into the sixth inning and Austin Buc finished it off for us.”