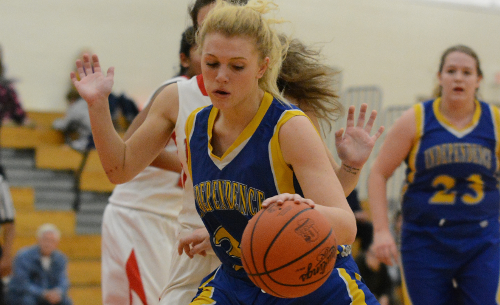 A disappointing loss at Hawken on Monday was all the inspiration the Independence girls needed to come away with a 36-29 win at Fairport Harding on Saturday.

Hallie Zumack led the Blue Devils with 15 points while Megan Kuczmarski added 12 in the win.

“We were very disappointed with the way we played on Monday,” said Independence coach Mike Marcinko. “I thought the girls worked hard at practice. We had a good week of practice and I thought based on practice we would perform better than we did. Any win is a good win and especially on the road. It was a conference win against a solid team. I thought they did a really nice job of making the best of the situation and bouncing back and getting the W.”

Zumack, who leads the Blue Devils with 12.8 points per game, agreed with her coach.

“We definitely needed that win,” she said. “It was our first on the road win so it's nice to have that under our belts now. We just need to keep producing on offense because our defense is pretty solid. It's our offense and turnovers that kill us. We just need to keep being confident with the ball and have control like we did today and against Cardinal and we will be just fine.”

Fairport jumped out to a 7-6 lead after the first quarter but the Blue Devils held the Skippers to just three points in the second quarter and led, 12-10, at the break.

Zumack paced the Blue Devils to a 13-point third that extended their lead to 25-17.

“On both ends Hallie was in charge,” Marcinko said. “She was getting us in and out of defenses and changing coverages. Offensively, she did a good job. Fairport does a good job of sliding up to you and trying to take charges, so in the first half she was a little bit frustrated because she couldn’t get all the way to the rim. In the second half she did a really nice job of stopping short and pulling up to shoot a mid-range jump shot. She made a nice adjustment and hit her free throws as well.”

Kuczmarski earned her 12 points and also made it difficult for Fairport’s shooters to get to the hoop.

“Megan inside did a nice job,” Marcinko said. “Their post player is very physical. It was a battle between the two of them. They were really getting after it and I thought Meg hit some crucial buckets for us and had some blocks and rebounds late in the game. She’s solid game in and game out. She’s finding a way to contribute every single game.”

Morgan Ondo led the Skippers with 17 points but she was limited to just three 3-pointers and Fairport had just five threes in the game.

Jessica Dmitruk pitched in with five points for the Blue Devils and Riley and Mia Coudriet both added two.