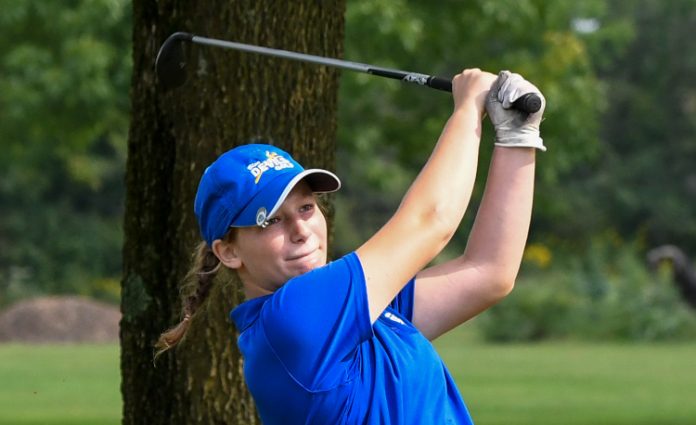 Independence’s girls’ golf team recorded a historic round in placing second at the Massillon Jackson tournament at Elms Country Club on Thursday.

The Blue Devils, who finished with a team score of 330, saw all five players break 85 for the first time since the program began nine years ago. On top of that, all six players who competed carded a career-low score.

“We’ve never had six girls shoot under 90 in one day, so that’s a first. We’ve never had five girls shoot under 85, so that’s a first, and we’ve never had six personal bests all in one day,” said Independence coach Karl Schuld. “I thought maybe it was the course and then I looked up the sectional scores from the last two or three years because they’re all on Baum’s Page and the scores were like last year. I think Jackson won it with a 325, so we were right there with all of these Division I teams at the sectional based on our score today. The girls did everything they needed to do to put up some tremendous scores.”

Emma Konopa led the way with a team-low 81. Macey McGhee obliterated her career-best with an 82. Bel Trombetta added a career-low 83, and Adriann Buyansky rounded out the scoring with her all-time low score of 84. Kate Coljohn finished with her best score of 88.

“All of those kids went out and played the round of their life, every single one of them,” Schuld said. “They hit fairways and greens, all the little things we’ve talked about, they did it.”

What’s even more astonishing about the historic round is the Blue Devils played without two of their top golfers, Molly McGreal and Hillary Esper, who had the day off after playing in a couple of tournaments this week.

Their absence gave the others an opportunity to show what they could do in the varsity lineup and they made the most of their opportunity.

“What’s really exhilarating is just watching how they all get along and how they’re supporting each other,” Schuld said. “When they finished up, they would hurry back out and watch the other girls finish up on the course. It’s a tough situation because we have seven or eight girls fighting for five spots but they all support each other.”

The Blue Devils returned every golfer that competed in the state tournament and this year they have added depth and intra-squad competition that is pushing each golfer to elevate her game.

“I’m not going to put limits on this team,” Schuld said. “I can’t fathom what the future will bring. There are always questions about what could happen and this and that, but any doubts I had in my head about this team are now gone.”

Schuld remembered a conversation he had with his young squad on the first night of the state tournament last year.

He told them how he felt they were set up for at least a two-year run if they put in the work.

“They have done everything I have asked them to do,” he said. “I asked them to get stronger and they set up their own weightlifting program. I asked them to improve their accuracy and they have been working on their shots from 150 yards and in. They have played so much golf this summer to prepare.”