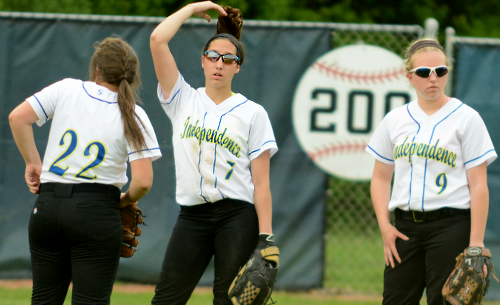 Blue Devils remain undefeated with shut out of Perry

The Blue Devils, who improved to 6-0 overall and 2-0 in league play, scored a pair of runs in both the third and fifth innings and shut down the Pirates’ bats in the win.

“We played very well,” said Independence coach Garry Moore. “Perry was solid. They have a new coaching staff and everything is new over there but they did very well.”

Ferrara led off the Independence third with a single and moved to second on a ground ball by Katie George then scored on the first of Victoria Sirna’s two singles. Halle Dorko reached on a fielder’s choice and later scored to make it 2-0.

It was Ferrara again that kick-started the Blue Devils’ offense in the fifth when she doubled. George drew a walk and both runners scored on Sirna’s second hit of the game.

Ferrara finished 3-for-3 with two runs scored, a double and a key catch in center field that took away an extra base hit.

“She’s the engine that starts our team,” Moore said of Ferrara. “When she goes we go. She’s tough; she’s mentally and physically tough. She’s a quiet giant out there. She doesn’t say much, she just goes out and does her job.”

Sirna recorded her second shutout of the season. She allowed just five hits and struck out seven in the complete game win.

Freshman Kim Rega added another hit and Larissa Adams was 1-for-2 with a long double.

“Kim Rega continues to hit the ball. She’s been (the designated player). She hasn’t seen the field much but she’ll pitch for us (on Thursday) at Kenston. She’s got a decent batting average right now,” Moore said. “Larissa missed a home run because the wind blew it foul but she crushed it. The second time, she did it again and it hits the top of the fence for a double.”

Independence is at Kenston on Thursday.