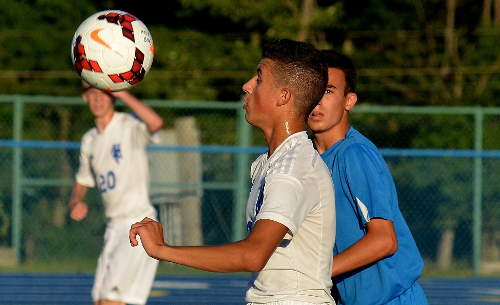 Independence got off to a fast start in an 8-3 win at Wickliffe on Tuesday an in Chagrin Valley Conference Valley Division matchup.

“We scored four goals in the first seven minutes,” said Independence coach Ryan MacRaild. “I’m not sure what happened there but after that they woke up and made it a game. They realized they were up against it and put on the pressure. They have a dynamic player up top that was giving us a headache. A lot of pressure and opportunities from him but the defense held well.”

Christian Seif led the Blue Devils with a pair of goals and Sam Belitz, Evan Collins, Ryan Straub, Kevin Mewhinney, Wyatt Kunevicius and Nathan Wells each scored one for the Blue Devils. Matt Mroczysnki, Collins (2), Mewhinney (2) and Kunevicius (2) all had assists.

“It was a pretty well-rounded attack,” MacRaild said. “We moved the ball well and scored off pretty much every chance we could muster up. We tried to capitalize on everything. It was a fun game.”

With its offense clicking early, Independence was able to spread the ball and keep Wickliffe off balance defensively.

“We moved the ball well,” MacRaild said. “We were moving the ball well with our possession game. I just don’t know that Wickliffe was expecting it necessarily but they got a little shell-shocked early and then tightened it up after a while.”

The Blue Devils got another solid performance from sophomore Tyler Korecko in goal.

“Tyler Korecko made some nice plays and saves and defensively kind of kept us in it,” MacRaild said.

“We tied Beachwood and that was kind of our litmus test in the league,” MacRaild said. “Last year they beat us early and we were always behind them in the standings. This year we’re kind of neck and neck. I’m excited to play the league.”