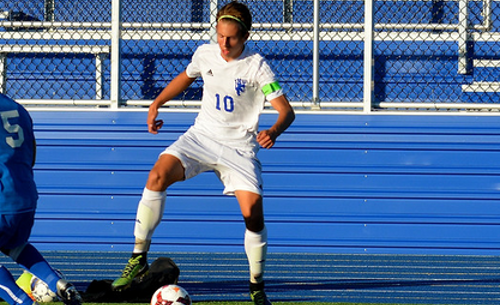 That strategy worked for about five minutes.

The Blue Devils broke the Redskins’ trap and cruised to a 9-2 win.

“Cuyahoga Heights was working to trap us and for the first five minutes or so we had a number of off sides called on us, but once we worked the ball out of the mid a little quicker we were able to spring our forwards on the attack and get our rhythm,” said Independence coach Ryan MacRaild. “With six goal scorers and four different players getting assists, this game was a balanced attack.”

Senior Evan Collins led the Blue Devils with three goals and an assist.

He opened the scoring for the Blue Devils and later assisted on one of Wyatt Kunevicius’ two goals.

“This was a sterling performance from Evan, one that we have often expected and gotten from him, but have been able to allow other players the opportunity to shine with so much attention being paid to him, he has been lurking in the shadows, distributing and facilitating,” MacRaild said. “Tonight he stepped out with some quality strikes and great finishes.”

Laski finished with four saves and Korecko recorded seven behind a mostly JV squad in the second half.

“It was a good balanced attack with some good creativity,” MacRaild said. “We missed a few chances early on, but kept our patience and worked the ball to find the back of the net. I am excited to see our improvement so far this season and know that we still have room to improve.”