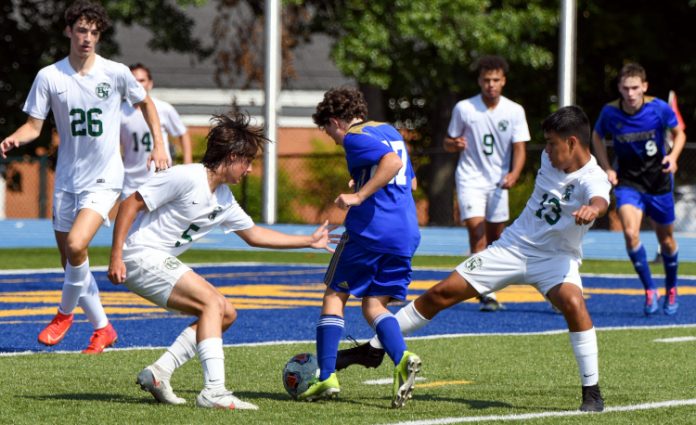 INDEPENDENCE—Khalil McDonald was in the right place at the right time for the Independence Blue Devils to salvage a tie with visiting Holy Name on Saturday.

Trailing 1-0 with just over five minutes remaining, McDonald punched in a deflection off of a Casey McGhee corner kick to earn the draw.

“I thought they really stepped it up today,” said Independence coach Ryan MacRaild of the Holy Name side. “They are much improved. Obviously, we left a lot out on the field that could have been better but they came to play. That’s good for their program. We just have to raise our game next time we step on the field.”

Holy Name scored with 19:29 remaining in the first half and then defended the Blue Devils well until the late corner kick led to McDonald’s equalizer.

Independence (6-1-1) had multiple scoring opportunities throughout the game but an outstanding effort by the Green Wave keeper and some off-target shots kept the Blue Devils off the scoreboard.

“Our shot selection was average at best,” MacRaild said. “We had a lot of stuff spraying all over the place. We could have had a little better connectivity in the final third. I thought we were taking chances from far away that were a little ambitious and we could have made more of it.”

Aidan Coljohn, Emmett Stralka, and McGhee all peppered the goal with shots but the Blue Devils attack most often drew a cluster of defenders, which made it difficult to put an effective shot on target.

“I felt like we were all kind of going to the same space and not trying to stretch it out enough, so we’ve got to work on that,” MacRaild said. “We come right back on Monday with a game and Tuesday with a game, so all those adjustments are going to have to happen after those two games.

McDonald has now scored clutch goals in back-to-back games. He scored the decisive goal in a 2-1 win at Andrews earlier in the week with just over a minute to play and followed that up with the tying goal on Saturday.

“He’s a scrappy player. He doesn’t back down from a challenge and he knows how to score goals,” MacRaild said. “We try to get him into situations where he can be effective and he takes advantage of it. We need more of that.”

Independence’s Elek McDonald not done yet