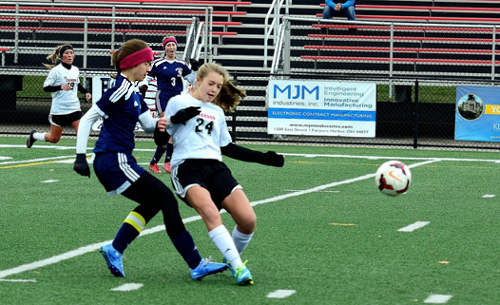 Chardon pulled out a 3-1 win over visiting Independence on Saturday but the young Blue Devils showed how much they have improved throughout the course of the regular season.

“We have a much different team than we had earlier in the year,” said Independence coach Bryan Less. “They’re playing harder; they’re passing better and altering things correctly. Even the newer players are starting to learn the game and they’re helping out. It’s been a nice process to watch.”

The Hilltoppers scored just five minutes into the game but Independence senior captain Olivia Jones tied it up 10 minutes later when she finished off a swing pass from Ellie Clymer.

“We were passing around the midfield and Ellie made a nice little pass,” Less said. “She ran right through that ball, kept her toe down and hit a nice line drive into the top of the net.”

That 1-1 score held up until the ninth minute of the second half and the Hilltoppers closed out the scoring late in the game.

“The effort was there,” Less said. “I thought we worked hard for 80 minutes. Our passing was not as good as it was on Wednesday and that was the difference, but they played hard.”

Independence’s defense, anchored by goalkeeper Krista DeFini, has shown the most improvement.

The Blue Devils open postseason play on Thursday against the winner of Cuyahoga Heights and Oberlin. Cuyahoga Heights earned the No. 1 seed in the Division III Rocky River District while Independence is No. 8.