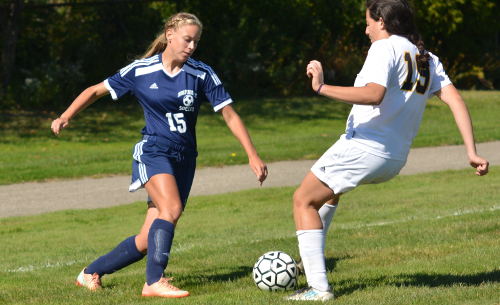 Independence’s girls’ soccer team opened the 2015 season with many new faces and very little experience but the Blue Devils grew up in a hurry and beat Oberlin, 4-0, on Monday.

Julia Gutermuth scored two goals while Ashley Henderson and Emily Reed added one each. Henderson also had a pair of assists.

“We played well,” said Independence head coach Bryan Less. “I had a ton of seniors that graduated so I have a young, inexperienced team. We have 15 players. One is a freshman and four others have never played soccer before this summer and one of my returners sprained her ankle in our last scrimmage. I told the girls if you guys outwork this team you’re going to win and they did. They had real good effort. We won balls in the midfield. We outworked them and our fitness showed up in the second half.”

The Blue Devils missed several first half scoring opportunities when they failed to convert on five fast breaks. The second half also started with a missed fast break opportunity but the team regrouped and focused on feeding the ball to the middle.

That strategy paid off.

The fourth goal was off a Gutermuth corner kick.

“It was beautiful,” Less said. “It was heading for the far runner but the goalie got her hand on it and it went in.”

Henderson’s contribution to the win went well beyond her goal and two assists.

“Both of my outside (midfielders) were either freshmen or it was their first year playing soccer,” Less said. “She and Julia did a nice job of helping to direct them. She was a little field general out there.”

Seniors Olivia Jones and Ellie Clymer also played a big role on the defensive end of the field, which helped Krista DeFini record a clean sheet with one save in goal.

“They did a really nice job helping control our inexperience on the outside,” Less said. “They helped control that and let them know what to do and they did a nice job shutting down the middle and communicating.”

Daniela Radujkovic also had an assist for the Blue Devils.