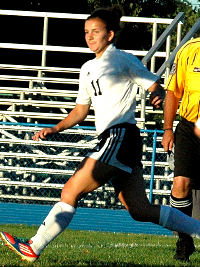 Blue Devils spread the field in 2-2 draw with Chardon

Independence’s game plan nearly worked to perfection in a 2-2 tie nonconference tie with Chardon on Thursday.

The Blue Devils spread the field to create shot opportunities and led 2-0 after Jen Wisniewski and Olivia Jones both scored first half goals. Chardon scored in the second half off a turnover and a rebound to avoid the loss.

“We played well,” said Independence head coach Bryan Less. “Chardon’s a big Division I team but we had really good passing; this is the best passing team I’ve had. We moved the ball all over the place. It was a physical game but we played well.”

Wisniewski scored near the midway point of the first half off Hannah Presot’s outstanding pass to Julia Gutermuth.

“Hannah played the ball wide to Julia and she banged the ball inside to Halle Dorko; it was a nice through ball,” Less said. “Jen got the ball and put it in the back of the net.”

Dorko and Wisniewski teamed up on the second goal as well.

It started with Dorko pushing the ball through the middle to Wisniewski, who made a move to get the ball into Jones.

“Olivia got it and put it in,” Less said.

Independence’s defense nearly held the lead but the Hilltoppers scored their first goal off a turnover and tied it up when a second attempt hit the post and a Chardon player was in perfect position to tap it in.

“We didn’t play perfectly,” Less said. “Their one goal was off a turnover and the other our keeper made a great save but their forward put it in off a rebound.”

Despite the tie, Less was pleased with the work of his defense.

“The defense played really well,” he said. “Marissa Artrip and Ashley Henderson, both of them were all-conference last year, we moved them to center back and they were just all over the place moving up and back. They both had a real strong game.

“Except for a couple mistakes, the defense did really well.”

“She’s doing well,” Less said. “She had a big game today. She had a couple diving saves and last year she could punt the ball maybe 20 yards. Today she hit the 47-yard line and she throws it farther than any keeper I’ve had by far.”

Chardon outshot the Blue Devils, 16-9, but due to Independence’s defensive pressure most of those shots came from deep in the field and at bad angles.

The Blue Devils travel to Gilmour Academy on Tuesday and to Kirtland on Thursday.