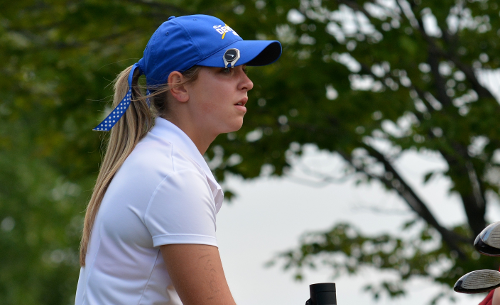 Blue Devils step up their game

A fifth place finish at a golf tournament isn’t often cause for celebration but the Independence girls’ team earned the right to celebrate.

Defending Division II state champion Dover won the Padua Invitational by Solon, Walsh Jesuit, which finished 10th in the Division I state tournament last season, Magnificat and the Blue Devils. Independence finished ahead of Division I programs such as Brecksville, Medina and North Olmsted.

“We had a day today,” said Independence coach Karl Schuld. “It was pretty special.”

Sophia Trombetta continued her outstanding play to finish with a 76, good for second place overall. Bryleigh Wise set another personal record with a 92, Lyndsay Blum shot 93, Kaylie Kemenyes finished with a 97 and Maddie Harper celebrated her birthday with a106.

The team set new school records with four girls scoring under 100 and a team score of 358.

“They were so pumped up,” Schuld said. “It was amazing because for a while we were thinking we were even going to be higher. The first scores they posted we were ahead of a lot of those schools then they threw up some other scores.”

Independence’s meteoric rise as a powerhouse program in just its second year of existence can be credited to the girls and their competitiveness.

“What I have right now is competition,” Schuld said. “There is competition between the kids. They all, in a healthy way, want to try to outdo each other.”

She finished the Chagrin Valley Conference preseason tournament with a then best 100 and immediately set her sights on besting that score.

“She’s a phenomenal athlete and she cares so much about golf,” Schuld said. “She’s basically thinking about golf all the time. The minute we walked off the course the other day after she scored 100 she told me, ‘I can’t wait to go back out. I want to go back out because I know I can do it.’ That’s when you know you’re going to get better, when you want to work at it.”

The Blue Devils even drew praise from Medina Highland coach Mary Becker, who has coached the Hornets into a perennial powerhouse.

“Mary Becker from Highland came over and gave our girls a huge compliment,” Schuld said. “She came over and told our girls she was so impressed with how they handled themselves. Highland is one of the premier programs in the state year in and year out. To hear those comments from coaches in only our second year is flattering to say the least. The kids were pumped up. They were high-fiving each other and hugging each other. It was a neat day.”

Independence returns to action on Monday when they travel to Legend Lakes to compete in the Mentor Cardinal Invitational.