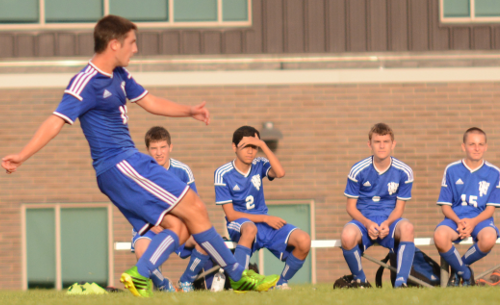 Blue Devils stick to plan in 4-1 win over Kirtland

Independence’s game plan heading into its key Chagrin Valley Conference game against Kirtland on Tuesday was to mark up Jordan Ianiro, the Hornets’ top scorer, and distribute the ball on offense.

The Blue Devils executed that strategy to perfection and won for the 11th time in their last 12 games, 4-1.

“We kind of had that bend but don’t break philosophy with a team like that,” said Independence head coach Ryan MacRaild. “The defense held tight and did their job. We tried not to make too many mistakes.”

With the win, Independence improved to 12-2-1 overall and finished CVC play with a 5-1 mark. The Blue Devils last lost back on Sept. 2 to Beachwood, who finished undefeated in CVC play for the third straight year.

Since that loss, the Blue Devils are 11-0-1. The only blemish was a 1-1 tie with Gilmour Academy on Sept. 25. The Blue Devils have outscored their opponents, 61-10, during that stretch.

“It’s funny, our last game was last Tuesday so we had basically a week off and I was getting a little worried because we had such a rhythm going,” MacRaild said. “Beachwood already had the league in hand so there was nothing to us and Kirtland to play for. This one was for pride and honor. They came out ready to work. It was a good night for the Blue Devils.”

Juniors Kevin Mewhinney and Evan Collins and senior Dan Malarik gave the Blue Devils a 3-0 lead in the first half.

Ianiro scored a late goal for the Hornets to cut Independence’s lead to 3-1 at halftime. Sophomore Christian Seif scored the only goal of the second half.

Defensively, the Hornets stuck to the game plan and limited Ianiro’s touches. Kirtland’s other dangerous scorers were shut down.

“We had a plan and stuck to it,” MacRaild said. “We didn’t want to get away from it. Defensively, we executed the plan. Jordan Ianiro is the real deal and a real handful. To go one-on-one with him is real dangerous. David Wisniewski was the defender that had pleasure of covering him tonight and he did a really good job.”

Malarik had two assists, Seif and Ryan Straub each had one.

Independence closes out the regular season against Wellington on Oct. 11.