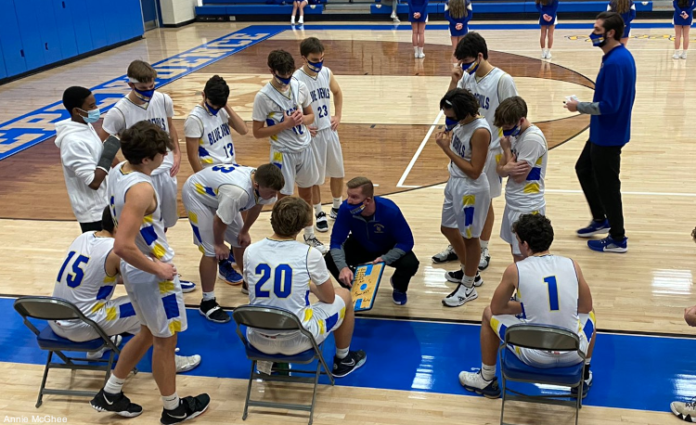 Independence trailed visiting Mayfield for three and a half quarters of Friday’s season-opener in the nightcap of the Independence Tip-Off Classic.

But, it’s not how you start that matters. It’s how you finish and Independence dominated the final four minutes of play in a 68-59 win.

“In a year like this, it’s crazy, you just soak up every opportunity you have to play against another team,” Independence coach Kyle Johnson said. “We didn’t start off well—we were down 16-3 at one point–but our kids hung with it and they stayed true to what we do. We never backed down. We just kept grinding away.”

Mayfield led after the first quarter, 21-9. The Wildcats would score just 38 points the rest of the way.

Independence pulled to within 32-27 at halftime and trailed Mayfield by five after three quarters.

“Earlier on in the game, our guys had trouble rebounding and their guards did a tremendous job of crashing the boards,” Johnson said. “In the second half, we were able to hold them to one shot and get the rebound and then hit our free throws down the stretch.”

Casey McGhee drained a pair of 3-pointers in the second quarter to fire up his teammates. The Blue Devils outscored the Wildcats in the quarter, 18-11.

That momentum carried over into the second half and the Blue Devils got hot in the fourth quarter with Kyle Zygmunt scoring 22 of his game-high 25 in the final eight minutes and Eric Mitrisin added 11 of his 15 in the final frame.

Mitrisin was a perfect 6-for-6 from the free throw line while Zygmunt was 5-for-6.

As a team, Independence converted on 24-of-31 free throw tries.

“Kyle only had three in the first half and he ended with 25 and Eric hit all his free throws down the stretch,” Johnson said. “Adam Miklovic did a great job on the boards. Casey hit two big 3s for us. It was just a group effort. Guys that came in did a great job. I couldn’t be happier.”

Independence took its first lead of the game when Mitrisin drained a pair of free throws to take a 54-53 lead with 4:36 remaining in the game.

Zygmunt then recorded a steal and went the length of the court to push the Independence lead to 56-53. Mitrisin added two more free throws after a Mayfield miss to complete the 6-0 run.

Leading 60-57, Zygmunt pulled down a defensive rebound and found Mitrisin cutting to the basket to make it 62-57 with 60 seconds left in the game.

Matt Richards and Zygmunt then connected on four straight free throws before a Mayfield layup. Zygmunt closed out the scoring with two more free throws with four seconds left.

While the Blue Devils won’t have much time in between games, Johnson is confident his team will be ready.

“We’ve had about four weeks of practices so if we’re not ready now, we’ll never be ready,” he said. “I told them to get some rest and eat and stay hydrated and get up in the morning to get back at it. We’ve got another game. I feel very confident with whoever we play as long as we stick to our game plan, offensively and defensively.”

Richards contributed to the win with 11 points, McGhee finished with six and Miklovic and Connor Blum both added five.