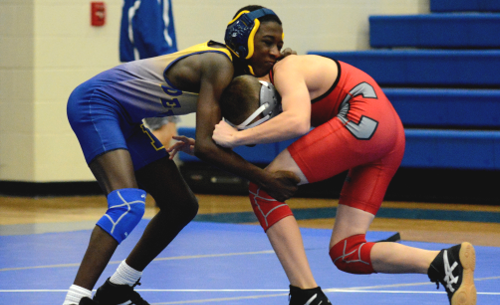 Independence defeated Cardinal, 41-33, then closed out the night with a 28-27 win over St. Ignatius.

“In matches like the two we wrestled, getting bonus points and not giving up bonus points is huge,” said Independence coach Ken DeAngelis. “Luke Swauger lost a match 7-0 but he saved us a point. Kevin Clymer won a match by eight points and got us an extra point. Those points here and there are the difference in a close match. We give up three forfeits so we’ve got to cover bonus points somewhere.”

Michael Kucera (106) opened the Cardinal dual with a forfeit and David Goldwin pinned his opponent in 3:46 to give the Blue Devils a 12-0 lead.

“You look at that match against Cardinal and it comes down to the heavyweight match but you’ve got to go all the way to the beginning of the match when they bumped away from Michael Kucera and caught me sleeping a little bit,” DeAngelis said. “They bumped to David Goldwin, a freshman with a little bit of experience, and he went out and wrestled the match of his life. That won us the dual right there. It was huge.”

Goldwin was winning his match 2-0 after the first period then recorded a takedown and three back points before recording the fall.

Nick Rossi lost by major decision to returning state qualifier Trent Mast at 126 and Drew Benos suffered a technical fall loss at 145 but they helped Independence’s cause by not being pinned.

“We weathered the storm with some of their hammers,” DeAngelis said.

Mroczynski’s pin at 170 was followed by three straight forfeits that allowed Cardinal to pull to within 35-33 heading into Stasek’s bout.

DeAngelis never doubted Stasek could win despite having the outcome of the match resting on his shoulders.

“The biggest thing was he stepped out on that mat and believed he was going to win,” DeAngelis said. “We work with him every day in the room. He’s wrestling with (Steve) Coljohn, with (Paul) Deely, with me, and you just believe you’re going to win. He stayed in a good position and stuck to the plan. He was physically tough and that is what we were looking for.”

Independence won six matches in its one point win over St. Ignatius.

Rossi and Swauger won by decision, Clymer scored a major decision and Matt Mroczynski, Nelson and Nick Mroczynski all won by forfeit.