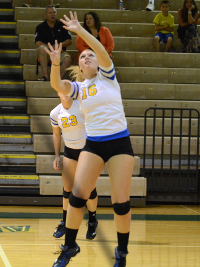 Independence’s volleyball team continues to build momentum as the Blue Devils improved to 4-0 with a sweep over Perry on Thursday.

“We played well,” said Independence coach Megan Osysko. “We controlled the ball well, kept it basic and got the job done.”

Their success started with the serve.

The Blue Devils served at the holes in the Pirates’ defense and ended up with 14 aces.

When the Pirates did return the ball over the net, Independence’s defense put the Blue Devils in position to score.

“We had some good plays, some good digs,” Osysko said. “Again our defense was pretty solid. I’m happy with that.”

Mallory Trombetta led the team with 16 digs and Collins pitched in with a dozen.

Screptock posted a team-high 12 kills as the Blue Devils pounded the ball at the Pirates. Magas had nine kills and Collins added six to lead the Blue Devils to a total of 38 kills in the match.

The Blue Devils return to action on Saturday when they look for redemption at Huron.