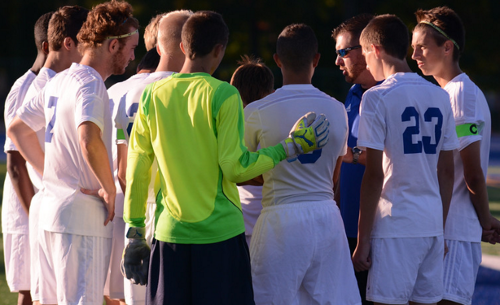 With its 6-0 win over Wellington on Saturday the Independence boys’ soccer team can check off one of its goals for the 2015 season.

Behind three goals from Wyatt Kunevicius, two from Ryan Straub and one from Evan Collins, the Blue Devils closed out an undefeated regular season.

“We got through a tough stretch facing Columbia, Elyria Catholic, Kirtland and Lake Ridge and then Oberlin with a 4-0-1 record and the boys really wanted to get that undefeated season tattooed into the record books,” said Independence coach Ryan MacRaild. “We have really been playing unselfish soccer and getting as many players into the scoring as possible. It has been a fun year.”

Independence improved to 14-0-2 on the year.

Kunevicius found the back of the net for the first time just over a minute into the game. The Dukes tightened up on defense and kept the Blue Devils from increasing their lead until Straub punched on in with 4:43 to go in the first half.

The second half saw Kunevicius score two more times in the first 10 minutes and Collins scored on a free kick from just outside the box. Straub closed out the scoring with his second goal.

Straub, Kunevicius and Kevin Mewhinney all had assists for the Blue Devils and Tyler Korecko recorded his third shutout of the season thanks to the work of the defensive back line of Drew Benos, Matt Mroczynski, Jared McCollough and Nolan Fields.

The six goals pushed Independence’s season total to 101, a new school record. The old record of 76 was set by last year’s squad.

The Blue Devils open post-season play on Saturday against the winner of the Lake Ridge Academy-Cuyahoga Heights game.