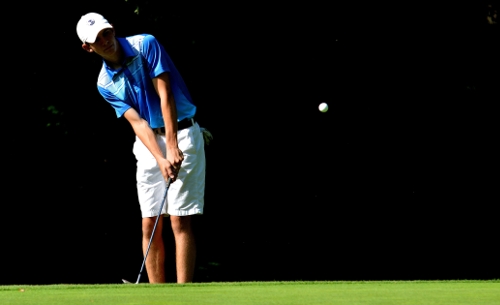 Independence’s boys’ golf team isn’t likely to steal the Chagrin Valley Conference title from Hawken but the Blue Devils did score a big win this season when they upset Orange, 166-170, on Wednesday at Beechmont Country Club.

Tyler Wilson led the Blue Devils with a 36 while Nick Brunsman shot a 40. Andrew Teriberry and Brian Roddy finished with a 44 and 47, respectively.

“We were playing at Beechmont Country Club, which we’ve never played before,” said Independence coach Mark Echstenkamper. “That’s one of Orange’s home courses and to put up a 166 on a fresh course was a really nice outing.”

Wilson’s score was particularly impressive considering some of the trouble he encountered on the course.

“Tyler made some great scrambling shots,” Echstenkamper said. “He got himself in trouble and scrambled out of it.”

For Independence’s senior golfers, the win was validation of their growth and development.

“It means a great deal because throughout our high school career we looked up to schools like Orange and today we actually beat them in our last match,” Wilson said. “It means a lot to see coach (Echstenkamper) as happy as he has been with the team.”

Independence improved to 12-1 in dual match play this season, which Echstenkamper believes could be a new school record.

The big win also boosted the confidence of the Independence players heading into Monday’s CVC post-season tournament and the sectional tournament later this month.

“Orange traditionally is a very good team so that was fun,” Echstenkamper said. “Really, what we’re playing for right now since the CVC is pretty much decided in our division, Hawken ran away with it, our goal right now is to get ready for sectionals. We’ll use Monday to do that.”

The Blue Devils will complete a previously postponted match with Trinity on Thursday before beginning the post-season on Monday.