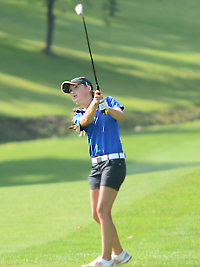 Blue Devils win a big one

The Independence girls’ golf team has had many highpoints in its first year of competition. Now the Blue Devils have a signature win.

“They’re Division I and I believe they were 6-2 or 7-2. I know they only had two losses,” said Independence coach Karl Schuld. “They’ve been as low as the 170’s before so this is a big win and we’re very excited.”

Trombetta has been Independence’s top player all season and she’s been getting better as the postseason approaches.

On Thursday, Trombetta played a double-bogey free round and shot par on the final six holes.

“She played real well,” Schuld said. “From 13 on she shot par. That course plays at 2,906 (yards), so that’s a long course. I like it because it kind of reminds me of Punderson and that’s where we’ll be playing our sectional. It was a good test for us today.”

Lyndsay Blum and Kaylie Kemenyes both scored 49 for the Blue Devils.

“They’re both good scores,” Schuld said. “Lyndsay has been consistent for us all year. She’s been in the 45-49 range for several matches in a row and her season average is now 46.41. That’s darn good for a freshman.

“I felt really good for Kaylie. She started the season in the 40’s but in recent matches she couldn’t break that 50 barrier. I was happy for her today with that 49.”

“She’s the most improved player on the team,” Schuld said. “Her first tournament was a 121 and since then she’s been lowering her average and now it’s 53.94. She’s now averaging about a 108. That’s a huge improvement in one season.”

With the win the Blue Devils improved to 6-2 in dual meets.

The Blue Devils will close out their conference schedule on Monday against Berkshire at Seneca Hills and then play Revere on Tuesday at St. Bernard. The Chagrin Valley Conference postseason tournament is on Wednesday at Glen Eagle and the sectional tournament tees off the following Monday at Punderson.