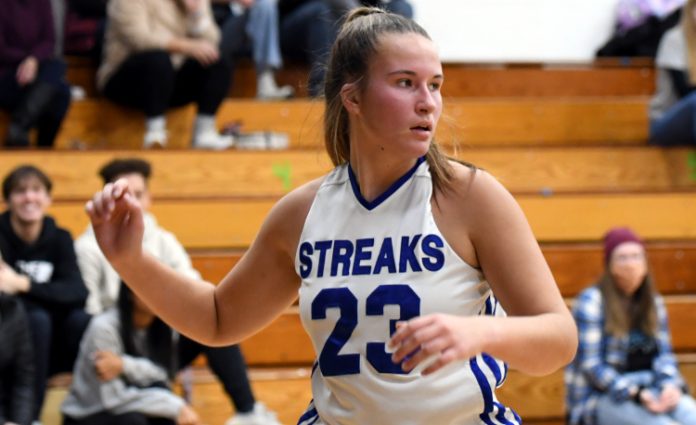 Noticeably absent from the most recent News-Herald Girls’ Basketball Top of the Crop was the Madison Blue Streaks.

After losses to Perry and West Geauga, the Blue Streaks are fighting for respect and after Wednesday’s 71-46 win at No. 8 Chardon, they might have earned it.

“We saw the new Top of the Crop and we saw we weren’t in there and I think that’s where we deserve to be but until we beat some teams, we’re not going to be in there,” said Madison coach Tedd Wagner. “They want to go out and earn some respect and I think today was a good first step.”

Riley Montagner scored eight of her game-high 23 points in the first quarter as the Blue Streaks opened the game with a 17-14 lead after the first eight minutes of play.

Madison began to pull away in the second quarter.

Payton Lewanski scored six of her 16 in the quarter and Montagner added five more to help the Blue Streaks take a 38-29 lead into the locker room.

“Coming out of halftime, we knew that we had to continue to pressure Chardon on defense and our offense would follow,” Lewanski said. “I thought we executed plays well on offense and played intense defense, which ultimately allowed our team to pull away with the lead.”

The Blue Streaks outscored the Hilltoppers in the third quarter, 19-7.

Lewanski and Montagner both scored six points in the third and Elizabeth Bottar drained a pair of 3-pointers on her way to an 11-point performance.

Kearsten Woleben and Chloe Bancroft contributed to the win with nine and eight points, respectively.

“The key for getting so many girls involved was running our base offenses,” Lewanski said. “We stayed away from running a lot of set plays this game, which allowed our team to be creative and opened up opportunities for everyone to be involved.”

“Payton has never played better,” Wagner said. “She’s rebounding, finishing at the rim, watching shots, and anchoring the defense. She is just playing outstanding basketball since she got back. I think missing a few games, you kind of think, ‘Wow, I really like playing.’ I don’t mean that in a bad way but when it’s taken away from you, it’s like, ‘Okay, I want this,’ and she’s playing well.”

The Blue Streaks, who improved to 3-2 overall and 1-0 in the Western Reserve Conference, have another opportunity to earn that respect on Saturday when they travel to No. 3 Kenston.

“This Saturday will probably be one of, if not the, most important game for us this season,” Lewanski said. “We know as a team what we need to do to win this game, and these next two practices will be crucial in solidifying our game plan.”

Toppers power up in win at Berkshire

Chardon holds off Rebels with a cause

Rangers use second-half run to pull away from Madison