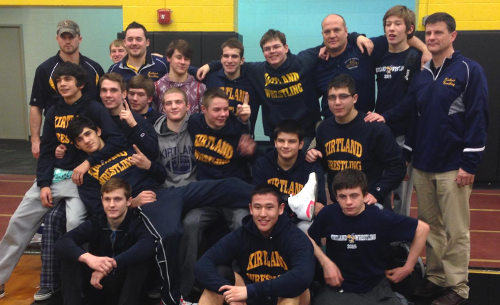 The Hornets, who won the Region 19 team dual championship and qualified for the OHSAA state duals, again used a team approach to win the 2015 Division III sectional championship at Beachwood High School on Saturday.

“In every tournament you have things that don’t go your way and you feel there are things you could have done better but our guys did well enough to win the tournament,” said Kirtland coach Scott Francis. “On any given day that’s what you look for; do well enough to beat the other teams.”

Kirtland entered the placement round with a 2 ½ point lead over Cardinal and a five-point advantage over Pymatuning Valley. The Hornets closed out the night by winning seven of nine matches with five pins and a major decision.

Those bonus points allowed the Hornets to finish with 156 points. Pymatuning Valley was second with 138 and Cardinal finished third with 132 ½.

“That was big right there, “Francis said. “In the finals our guys were getting the pins we needed to. We won most of our finals matches. That finals race was tight at the end. We came in and saw the scores. We were kind of worried and knew we were going to have to kind of wrestle well there. Our guys rose to the challenge, not only by winning but getting pins. In tournaments the pins are huge. Every time you pin it’s like another win.”

Chris Brown, Chris Sakenes and Clayton Davidson all won individual championships and will earned No. 1 seeds at next week’s district tournament at Garfield Heights. Evan Francis finished second, Mike Petterson, Mike Calvert and Anthony Porter all were third and Dylan Choe placed fourth to give the Hornets a total of eight district qualifiers.

Daniel Jahnke was fifth at 120 and will be a district alternate.

Brown went 2-0 with a pair of pins to win the 145 pound weight class. Wickliffe’s David Monturi was the projected No. 1 seed but a clerical error prevented him from competing.

“Chris Brown benefitted from an unfortunate circumstance from another team but he probably would have made the finals anyway, that was what we were planning on,” Francis said. “Getting there and getting the championship was great for him.”

Sakenes pinned both of his opponents to win the 152 pound championship and Davidson was 3-0 with three pins at 160.

Davidson won his third sectional championship and is a four-time district qualifier.