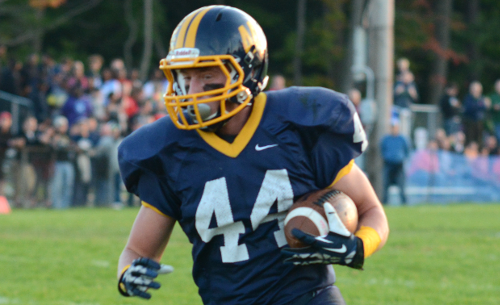 Kirtland scored 34 first quarter points and by halftime had closed out the scoring in a 48-0 win over Fairport Harding on Friday.

With the win, the Hornets improved to 7-0 and won their 52nd straight regular season contest.

“We’re actually just looking forward to trying to host a game in week 11,” said Kirtland coach Tiger LaVerde. “We’re trying to take care of business and improve on the things we’re not good at right now. If we take care of our weaknesses that will make us tougher to beat in the playoffs.”

Jacob Boyd did most of the damage for the Hornets.

He rushed for 137 yards on just 10 carries and scored on a 15-yard run to put the Hornets up 7-0. Midway through the first quarter he picked off a pass and returned it 25 yards for another score.

“Losing Sam Kukura (to graduation), he was a fantastic running back,” LaVerde said. “Jacob is a talented kid as well. He’s a big, strong kid at 190 pounds. He’s been playing very well for us on both sides of the ball. He’s a shutdown corner. We usually put him on the other team’s best player and he does a nice job for us.”

Through seven games, Boyd now has rushed for 1,053 yards and 14 touchdowns on just 67 carries. He scores one touchdown for every five carries.

“It’s almost ridiculous,” LaVerde said. “He gets 15 yards every time you hand him the ball and we played Cuyahoga Heights and St. Joe’s and North is coming around now. We played some good competition. He did a very nice job in some big games. He turned the corner against St. Joe’s and those were some speedy kids. It was nice to watch.”

Fifteen different players recorded at least one carry for the Hornets, including offensive lineman Brett Diemer, who was second on the team with five carries for 29 yards. Matthew Finkler led the Hornets with three catches for 43 yards and a touchdown.